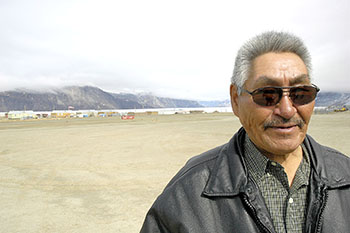 Thomasie Alikatuktuk of Pangnirtung: the well-known artist and politician is credited with bringing stability to the Qikiqtani Inuit Association after he began serving as president in 2001. (FILE PHOTO)

To fill his vacant seat, the QIA will hold a Baffin-wide by-election Dec. 14, when QIA beneficiaries will also elect a secretary-treasurer. At the same time, beneficiaries in six communities will choose community directors. Until then, the organization will appoint an interim president.

Alikatuktuk, 56, has served in QIA’s top job since since September of 2001, when he was appointed president on an interim basis.

He’s credited with helping to bring stability and competence to an organization that in 2000 and 2001 was teetering on the edge of collapse due to numerous staff resignations and the removal from office of two previous presidents.

The QIA says nomination papers for the Dec. 14 presidential by-election must be sent to their office in Iqaluit by 5:00 p.m., Nov. 6.

The person chosen as president in that election will serve out the remaining two years of Alikatuktuk’s term, which was to expire in December 2011.

Also on Dec. 14, QIA beneficiaries will choose a secretary-treasurer to serve a three-year term.

And in Cape Dorset, Hall Beach and Resolute Bay, beneficiaries will vote in by-elections to choose community directors to serve two-year terms.