The BIPAR is back, Kitikmeot leader says

Nunavut megaproject still in the works 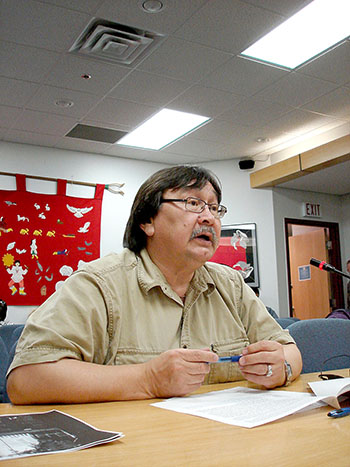 The Bathurst Inlet road and port project is a “number one” priority for the Government of Nunavut, Charlie Lyall, president of the Kitikmeot Corp., told delegates to this week’s annual general meeting of the Kitikmeot Inuit Association in Cambridge Bay. (PHOTO BY JANE GEORGE)

CAMBRIDGE BAY – If Kitikmeot Corp. president Charlies Lyall had any encouraging news to share Oct. 26 at the Kitikmeot Inuit Association’s annual general meeting in Cambridge Bay, it was that the Bathurst Inlet road and port proposal is still alive.

In fact, Lyall told delegates “our project is the number one project on the GN table,” mainly because two Kitikmeot MLAs, Keith Peterson of Cambridge Bay and Peter Taptuna of Kugluktuk, now sit in cabinet as part of the Government of Nunavut.

“They’ll be able to help us more,” Lyall said.

Asked later about for a timetable for the Bathurst Inlet port and road project or even how much the project would cost, Lyall didn’t have an answer— yet.

The project, a development promoted by the Kitikmeot Corp. and Nuna Logistics, was originally slated to cost about $270 million.

KC put the project on the backburner in 2008 when key promoters turned lukewarm and the federal government didn’t come through with any money.

Money is still the issue in moving ahead with the project located 35 kilometres to the south of the Bathurst Inlet community, Lyall said.

The port facility would also involve the construction of a dock, 18 large fuel storage tanks, a 211-km. road to Conwoyto Lake, a 1,200-metre airstrip and two camps for about 200 workers.

When completed, the port on Bathurst Inlet would see traffic from 50,000-tonne ice class tankers as well as fuel resupply barges to communities in the Kitikmeot region.

It would substantially lower the cost of fuel to the region, Lyall said in a brief interview.

This would hopefully spark new life into mining development in the Kitikmeot where nearly every company decreased or suspended exploration activities in the region in 2009.

And it appears from information distributed at the KIA meeting that the port and road project may have a renewed backer.

The China Minmetals Group, the company that now owns the High Lake, Ulu, Lupin and Izok mine properties, has decided that another party needs to build a road and port to make the zinc deposits at Izok or High Lake worth mining.

The Kititmeot Corp.’s report to the KIA meeting revealed how the slowdown in the mining industry has made business harder for its KC-owned companies.

Mining companies that provided development work or jobs have cut back or are looking to take over or re-tender out the work done by KC subsidiaries, such as Kitikmeot Explosives or Medic North Nunavut, Lyall said.

Kitikmeot Cementation was set up in 2005 for the construction of underground exploratory mines at the Diavik Mine.

But since this company’s contract with Diavik ended in 2008, Diavik has said it wants to all new employees to be on its payroll and has even “actively recruited” employees from Kitikmeot Cementation, Lyall said.

With the future of KC’s role in underground mine development at Diavik “unclear,” Lyall said its “role could quite possible continue to decline.”

“Revenues for 2009 have shrunk substantially from 2008,” Lyall said, noting that the impact on KC’s revenues and profits will be “significant and ongoing.”

Other KC subsidiaries are also in trouble.

I & D Management delivered manpower to Diavik’s open pit operations, but now Diavik wants to take over this workforce and bring it in house, Lyall said.

Toromont Arctic Caterpillar also had to cut its costs to remain a supplier to the Meadowbank gold mine, Lyall said.

It also looks as if the GN is giving contracts “simply to the lower bidder,” without weighing the Inuit-owned status of companies, Lyall said.

Will KC go down with a whimper? No, Lyall told Nunatsiaq News, vowing to prove KC’s companies can do the job better than outside or in-house companies and must be given the chance to do just that.