“Of course we are going to intervene” 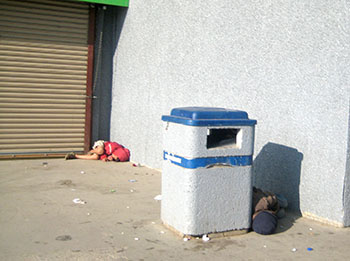 These two boys were photographed sleeping on the ground beside a garbage can in front of Iqaluit’s Northmart store at around 6:30 a.m., July 26. After police responded, they returned one boy to his mother, but the other boy had already left the area. (PHOTO COURTESY OF EVIE EEGEESIAK)

Iqaluit RCMP say the city resident who spotted two young boys asleep outside the Northmart early in the morning last July — and took their picture — did the right thing in notifying police.

“Of course you should call the police. And of course we are going to intervene,” Staff. Sgt. Leigh Tomfohr told Nunatsiaq News.

He added that police were unable to act immediately on this particular call, which came in from Amanda Eegeesiak at 7:00 a.m. on July 26, because they were in the middle of dealing with another incident.

But he said they did respond as soon as possible.

Eegeesiak took a picture of the little boys sleeping on the ground, and sent it in to Nunatsiaq News, along with her concerns.

“What is Iqaluit coming to?” her mother, Evie Eegeesiak, asked in an email to the newspaper. “Why are there little boys and girls sleeping on the streets of Iqaluit? Who do you call if the RCMP won’t come and help?”

The temperature that night in Iqaluit ranged from about 16 to 19 degrees Celsius, Environment Canada records show.

Tomfohr noted that when police did arrive at the scene, one of the boys had already departed.

The officers were familiar with the other boy because they had dealt with him on several occasions. He cannot be identified because of his age. Tomfohr said he is under 10.

They woke him up and took him home. They also notified social services of the incident, which Tomfohr said is the normal protocol when there’s no immediate sign of criminal activity.

“We have dealt with him on a steady basis. This young lad basically doesn’t want to be at home and there is not much his mother can do about it,” he said.

Social Services is conducting a follow-up investigation, he explained, which is also standard procedure. Should they find any evidence suggesting abuse or neglect, they will bring it back to the police and the two organizations will conduct a joint investigation.

Tomfohr said that any person in Iqaluit who knows of a child in danger, or being neglected or abused, should either phone the police, if it’s an emergency, or social services.

Social services can be reached during office hours at 975-7250 or after hours through the fire-department’s dispatch line at 979-5650.

(Due to the posting of defamatory remarks, the comment section underneath this article is now closed.)