Resolute, Iqaluit and Cape Dorset all plagued with water headaches 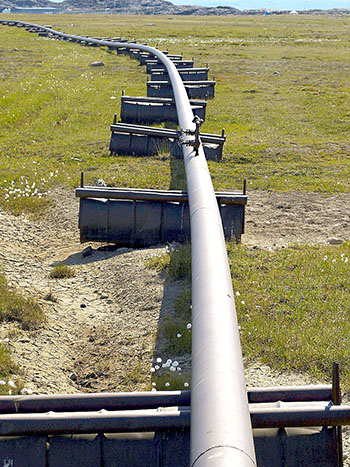 A utilidor pipe in Iqaluit: Because of a variety of issues related to aging or malfunctioning water and sewer infrastructure, at least three Nunavut communities suffered water shortages at various times over the past week. (PHOTO BY CHRIS WINDEYER)

The simple act of turning on a tap has been a challenge for at least three Nunavut communities this month.

In Resolute, 96 per cent of buildings in the hamlet saw a drop in water pressure because of a leak in the hamlet’s utilidor system, Quttiktuq MLA Ron Elliott said in an email.

The hamlet’s gym and community hall were entirely without water, he added.

In an email, Wayne Davidson, a hamlet councillor, told Nunatsiaq News that a crew from Community and Government Services was expected in Resolute Wednesday.

Davidson, who is, along with other Resolute residents, attempting to convince the Government of Nunavut not to shut down the hamlet’s aging utilidor system, referred to the GN’s response time as “donkey-speed rescue.”

Meanwhile, in Iqaluit, a recirculating line, which moves water around to keep it from freezing, sprung a leak near the Elks’ club in the city’s downtown Friday night, said Chris Callahan, the city’s director of public works.

The leak cut off water to most of downtown, between the Legion, the courthouse and along Federal Road, Callahan said.

Without water, the Legion had to shut down early Friday night, tossing tipsy patrons into the street and some residents of Inuksugait Plaza were without water Saturday morning.

“Right now with the ground settling, with the frost going into the ground, we had a well let go,” Callahan said. “But we had it up and running by 3:30 [p.m. Saturday].”

Newer pipes may have reduced the occurrence of leaks, but Callahan said that freeze-up causes the underground infrastructure to shift so much that periodic leaks are inevitable.

He added that was much faster than he expected and praised city crews for their quick response.

South Baffin MLA Fred Schell said a new water truck is due to arrive by sealift next week, to replace a truck that burned in a fire this past August.

The other two have since been plagued with mechanical problems. Schell said the hamlet was down to one working truck when he left town for meetings in Iqaluit Oct. 19.

“It’s impossible” for the drivers to keep everyone topped up with only one truck, Schell said.

“You pretty well need three [trucks],” he said. “What they can do when they have two trucks is run different shifts and they just run longer at night.”