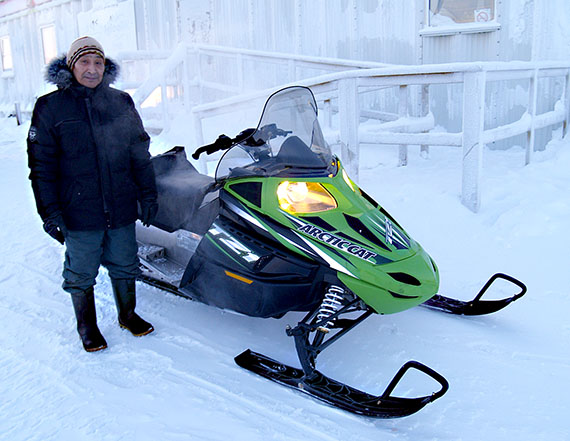 Wildlife officer Theo Ikummaq warms up his snowmobile in Igloolik Jan. 18. He says hunters in Igloolik are seeing more polar bears and, during the summer, southern species around the community. (PHOTO BY CHRIS WINDEYER)

Two of the most respected and influential wildlife conservation groups in the world have come out against calling polar bears an endangered species.

TRAFFIC, the international non-governmental organization that monitors the trade of wild plants and animals and their products, has submitted documents opposing the reclassification of polar bears proposed by the U.S. government.

TRAFFIC’s steering committee is composed of members of the World Wildlife Fund and the International Union for the Conservation of Nature.

“The threat to polar bears is not from trade. It is not really a concern at this time,” said Andrew Derocher, a member of the IUCN’s Polar Bear Specialist Group.

“We are looking to the future, 40 years, for polar bears to be in trouble due to habitat loss and the effect of climate change.”

An excerpt from TRAFFIC’s recommendations:

“The primary threat to Polar Bears is the retreat of sea-ice habitat, driven by global climate change. The global population of Polar Bears is not small and has not undergone a marked decline in the recent past; the species’ area of distribution is not restricted; and the projected rate of population decline as a result of climate change is estimated to be approximately 30% over the next 45–50 years. Therefore, the Polar Bear does not meet any of the biological criteria for inclusion in Appendix I. Trade is not a significant threat to the species.”

There are roughly 20,000 to 25,000 polar bears worldwide, mostly in Canada. According to TRAFFIC’s documents, around 300 Canadian polar bears have been killed per year since the 1990s, mostly by aboriginal hunters. That comes out to about 2 per cent of the population.

The U.S. government has asked the Convention on International Trade in Endangered Species to change polar bears from Appendix II to Appendix I. Appendix I is reserved for the most extremely endangered species at risk of extinction.

The U.S.’s proposal says habitat loss because of climate change is the main threat to polar bears.

It also says hunting could stress polar bear populations in regions where the animals are already in trouble because of climate change.

Craig Stewart, the director of WWF-Canada’s Arctic program, said the U.S. CITES proposal would do little to address the real threat to the species: greenhouse gas emissions that cause climate change.

“The U.S. is using the wrong tool for the job to address the fate of polar bears for CITES,” he said.

CITES will decide on the legal status of polar bears at its next meeting in Doha, Qatar in March.

Nunavut Tunngavik Inc. has come out in support of TRAFFIC’s recommendation against the polar bear reclassification.

“Inuit are reporting that polar bear populations are increasing. The TRAFFIC recommendation indicates there is no marked increase in the trade of polar bears, and that trade is not detrimental to their survival. The proposed American ban won’t protect bears from the negative impact of climate change. It will, however, adversely affect Inuit culturally and economically,” NTI vice-president Raymond Ningeocheak said in a press release.

“Inuit need to be more involved in information gathering and making decisions about wildlife in Nunavut. When scientists listen to us and understand what is actually happening here, there will be less confusion and misunderstanding about the current status of polar bears.”

“I don’t disagree that community members seeing a lot of polar bears right now, but we (Polar Bear Study Group) are looking ahead for sea ice and habitat loss,” said Derocher. “This is where we differ, but on the issue of hunting, both managers, hunters and polar bear scientists are on the same page.”