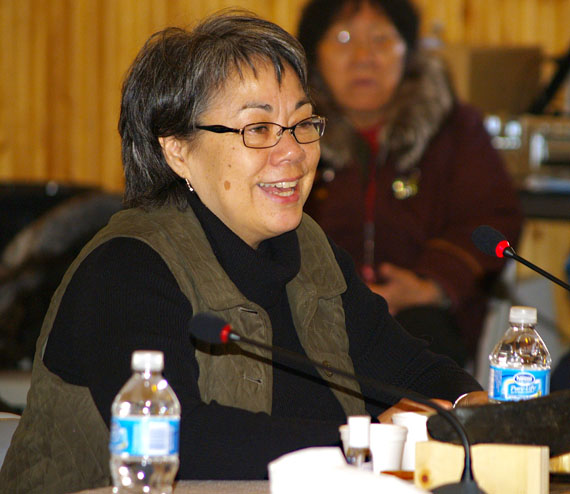 Nunavut Premier Eva Aariak at the Qikiqtani Inuit Association’s board of directors meeting in Iqaluit held Oct. 23. Aariak said she understands the frustrations of Nunavut residents who find it difficult to communicate with the government, pointing out that she experienced the same problem in the days when she ran a small business. “I know what it’s like,” Aariak said. The premier and other MLAs held caucus meetings all last week aimed at producing an action plan in response to the Qanukkanniq report card. (PHOTO BY CHRIS WINDEYER)

To demonstrate her government’s commitment to better communications with the public, Nunavut Premier Eva Aariak ended her appearance before the Qikiqtani Inuit Association board meeting in Iqaluit last week by giving out her office number.

Aariak appeared before QIA’s board on the morning of Oct. 23 in a lengthy session that saw her field numerous questions related to her government’s Tamapta mandate document and the Qanukkanniq report card released Oct. 1 by the North Sky consulting firm.

Her phone number gesture suggests that Aariak is already acting on the report card’s first recommendation, which urges the Government of Nunavut to improve communications with the public and within its operations.

“When they think they know who to phone, nobody answers,” the North Sky report said.

“I know what it’s like. When I ran my own business I would leave messages with the government and no one got back to me,” Aariak said.

For most of last week, Aariak sat in caucus meetings in Iqaluit held to discuss the report card and figure out how to respond to its unflattering findings.

She reminded QIA delegates, however, that the Qanukkanniq team also found that most residents still believe in the promise of Nunavut, in spite of their negative experiences with the territorial government.

“It was made clear that all Nunavut residents are still very proud of Nunavut and the believe the vision will materialize,” Aariak said.

The caucus meetings continued throughout the weekend and were likely to finish up by Oct. 26.

Some time after that, MLAs are expected to release a response plan and a set of priorities to guide their work between now and the next territorial election, about three years from now.

Aariak also told QIA delegates she thinks the absence of government liason officers, better known as “GLOs,” has contributed to the communications gap between the GN and the people of Nunavut.

The Government of the Northwest Territories used these liason officers as a primary point of contact between the government and residents of small communities.

“Now that they are not there, the communities are missing an important link to the government,” Aariak said.

She made this comment in response to a question from Joe Arragutainaq of Sanikiluaq, who complained that elders don’t know who to ask for information anymore.

Aariak also urged QIA directors to use their MLAs more often to get information about the government.

“Your MLAs are open, so talk to them. Talk to your MLAs and communicate with them,” Aariak said.

In response to a question from Phillip Paneak of Pond Inlet, who said the CLEY department should be expanded to run “Inuit schools,” Aariak pointed to the Piqqusilirivvik culture school in Clyde River, now under construction.

She also fended off complaints from people who said the Qanukkanniq group did much of their consulting work in the summer, when many people are camping on the land.

Aariak said the GN wanted to act quickly on the report card project, and pointed out that there are only three years left before the next election.

“If we had waited until the fall season, we would have lost five months,” Aariak said.