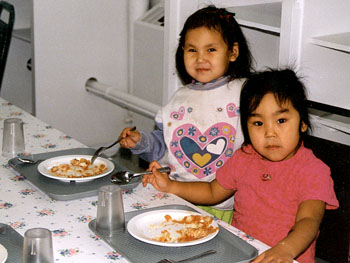 In a photo taken in 1999, children in Kuujjuaraapik eat a healthy meal at a community kitchen set up to combat anemia. Should Nunavut also start big feeding programs for badly-nourished children? The Qanukkanniq report card says yes. (FILE PHOTO)

The Government of Nunavut should create school lunch and snack programs “immediately” to make sure Nunavut children get enough to eat, the Oct. 1 Qanukkanniq report card recommends.

“People are concerned that children living in poverty are at greater risk of developing social, emotional, health, and educational problems as they try to deal with the stressful situations facing their families every day,” the report said.

These perceptions are supported by the results of studies released in Yellowknife this past July at the International Congress on Circumpolar Health.

One study, done as part of the 2007-08 Qanuippitali Inuit health survey showed that about one-half of Nunavut children aged three to five don’t get enough nutritious food to eat.

Another, also part of the Qanuippitali survey, showed that seven in 10 Nunavut families go hungry for at least part of the year.

Yet another study, done by the GN’s health department, showed that most pregnant women in the Baffin region are malnourished.

To protect children against malnutrition, the GN report card recommends the GN redirect funds from existing pots of money into the schools “for nutritious food and snack programs to ensure that children are adequately fed.”

In their report, Mcdonald’s teams says Nunavut suffers from “chronic problems of poverty and joblessness” rooted in rapid changes to the structure of Inuit society over the past six decades.

This intractable poverty means about 50 per cent of Nunavut households need income support, the current euphemism for welfare.

In some communities, a staggering 70 per cent of households subsist on welfare.

“Welfare dependency is exasperated by the extremely high cost of food in Nunavut and the inaccessibility of the food mail program to individuals who do not have credit cards, as is the case of many Inuit,” the report says.

To fix that, the report urges that the GN create a poverty reduction strategy.

The report’s authors say such a strategy should include:

• the encouragement of self-reliance through identifying jobs in communities that could be done by people moving off income support;

• review all GN policies to look for ways of reducing poverty and increasing self-reliance.

And an essential part of a poverty reduction strategy should included a “major review” of the income support program, which is run within the Department of Education right now.

McDonald told reporters Oct. 1 that many Nunavut residents feel income support payments are not high enough to provide the most vulnerable people with basic necessities.

On the other hand, many Nunavummiut also believe too many people now collect welfare payments.

To fix the income support program, the report card recommends the GN:

• make sure the most vulnerable people receive basic necessities, and review payment levels to make sure vulnerable groups get an adequate standard of living;

• increase self-reliance by finding new ways for people to enter the work force;

• find ways for job seekers to keep more of their income support payments;