Olympic torch to light up Nunavut next month 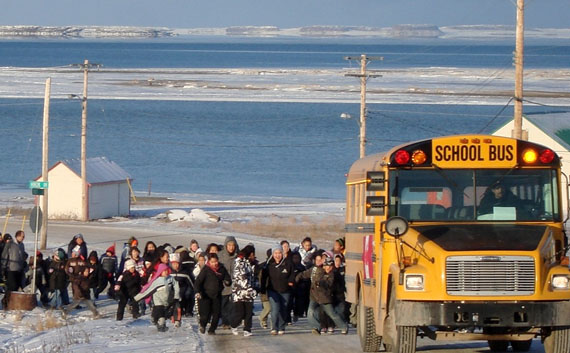 Students at Kugluktuk’s elementary and high schools march through town on Oct. 22 behind a school bus decked with a Canadian flag. The march kicked off a pep rally for the community’s upcoming participation in the Olympic torch relay. The torch will touch down in Kugluktuk Nov. 5 before it moves on to Alert on Nov. 8, to Resolute Bay and Iqaluit on Nov. 9 and to Kuujjuaq on Nov. 10. (PHOTO BY JANE GEORGE) 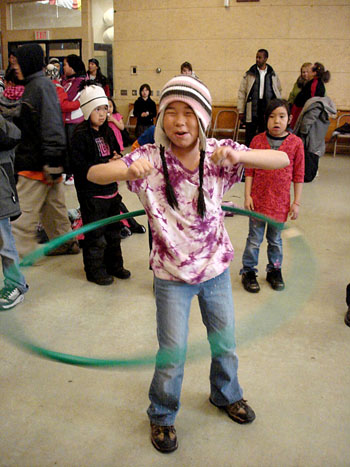 Students learned how to hula-hoop as part of an Oct. 22 pep rally to prepare for the arrival of the Olympic torch in Kugluktuk on Nov. 5. (PHOTO BY JANE GEORGE)

Elementary school students in Kugluktuk carry hand-made Olympic logos as they head off to an Oct. 22 pep rally for the arrival of the Olympic torch relay on Nov. 5. (PHOTO BY VANESSA MOSEK)

KUGLUKTUK — Sporting red and white top hats, toques and sweatshirts while carrying homemade medals around their necks, Kugluktuk students broke out into cheers Oct. 22 when they learned more about the upcoming arrival of the Olympic torch in their community, the first in Nunavut to participate.

“Only two weeks away from the torch showcasing our community to Canada,” Millie Kuliktana, the director of Kitikmeot School Operations, told a crowd assembled inside the community centre.

Four Kugluktuk residents will carry the torch Nov. 5 after it arrives in the community on a jet from Inuvik: Grade 12 student student Gavin Kamingoak, graduate Helena Bolt, Terry Kuliktana, a blind paralympic athlete who is returning to participate in the torch relay, and another yet-to-be-announced torch bearer.

To kick off the Oct. 22 pep rally, students with red and white banners marched to the community centre behind a school bus decked with a huge Canadian flag.

At the centre, they did their own demonstration of various sports. They performed high-kicks, push-ups and tried to spin hulu hoops, all for a chance to win Gatorade and t-shirts.

Looking on was Colleen Ruth Evighoak Ayalik, 27, who will be at the 2010 Olympic games in Vancouver next February as a volunteer assistant.

Excited? Flashing a big smile, Colleen, better known as Evik, says she applied to go just for fun- now she can’t wait to spend three weeks in Vancouver as part of the winter games.

To build more enthusiasm for the Olympics in Kugluktuk, the community will hold a second pep rally Oct. 29, this one with its own mini-Olympic-style competitions.

People can bring in the rock of their choice for curling (with a prize for the rock). They’ll also hold a mock luge sled race in roasting pans down a slippery hill and a street hockey game with brooms.

As Oct. 22 pep rally event went on in Kugluktuk, the Olympic torch was lit in Greece.

The origins of the Olympic torch or flame, now the number-one symbol of the Olympic games, lie in ancient Greece, where a fire was kept burning throughout the celebration of its ancient games.

Vancouver 2010 officials will fly the torch to Canada next week where it will start its 106-day, community-to-community treak that ends with the start of the winter games in February.

The torch touches down in Kugluktuk Nov. 5. Its other northern stops include Alert on Nov. 8, to Resolute Bay and Iqaluit on Nov. 9 and Kuujjuaq on Nov. 10.

This year’s torch relay is called “a path of northern lights.”

“The Olympic torch relay will unleash dreams and inspire pride in the hearts of Canadians by casting a glow of northern lights, stretching from coast to coast to coast,” says the games’ website at www.vancouver2010.com

The federal government is paying $12.5 million for the relay, and there are two corporate sponsors (which figure prominently on the relay’s promotional materials- Coca-Cola and the Royal Bank of Canada).