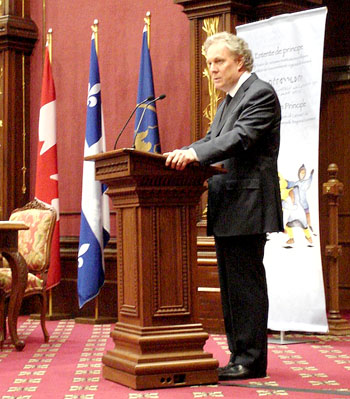 Quebec premier Jean Charest promised to give Nunavik its own riding when he signed the agreement-in-principle on a new form of regional government with Nunavik two years ago in the red room of Quebec’s legislature, the National Assembly. Now, Charest’s government will try to make good on this promise. (PHOTO BY JANE GEORGE)

KUUJJUAQ — By next June Nunavik may have its own provincial riding, called Nunavik, if the Quebec National Assembly passes a new bill that would redraw Quebec’s electoral map.

Bill 78,which would redraw Quebec’s electoral map, creates at least 126 guaranteed seats by granting certain numbers of seats to each administrative region. The bill also reforms the way that provincial election campaigns are financed.

The 126th riding, to be called Nunavik, would see the region separated from the current Ungava riding, which covers a big geographic region that includes Inuit, Cree and non-native francophone communities in the South.

Right now, the Ungava region is one of the smallest in Quebec, with a population of only 25,500 voters. That’s well below the average number of voters per riding in the province, 46,000 voters.

The Quebec election act states that the population of no riding may be 25 per cent greater or smaller than the provincial average, barring certain exceptions.

Since the proposed Nunavik riding would likely contain no more than 6,000, voters, it’s not clear how its creation would conform to the equality provisions of the elections act.

The Nunavik riding would include all Inuit communities covered by the James Bay and Northern Quebec Agreement.

Under Bill 78, the twin Inuit-Cree communities of the Great Whale River would be split between split between two ridings: Nunavik in Kuujjuaraapik and Ungava in Whapmagoostui.

The Nunavik riding has been a long time coming.

In 1972 a group of snowmobilers from Ivujivik traveled to Quebec City to ask that “an electoral district be constituted in Northern Quebec… to allow a Quebec Eskimo to hold a seat in the National Assembly.”

Nunavik leaders have lobbied for their own provincial riding ever since.

At the signing of the agreement-in-principle on self-government in Quebec City in December, 2007, Prime Minister Jean Charest promised he would create “a northern riding” for Nunavik, which would “consecrate the link between Inuit people and all of Quebec.”

But in 2008, Quebec had to back off a proposal submitted by Quebec’s chief electoral officer that would have seen a new riding called “Ungava” in northern Quebec.

This would have included Nunavik and all James Bay Cree communities except two, Waswanipi and Ouje-Bougamou.

According to that proposal, these two communities would have be sliced off and put into the Abitibi East and West ridings along with several non-native communities, which now lie within the Ungava riding.

Political pressure prompted the Liberal government of Charest to scrap the map less than a month after it was proposed.

Opposition may also be strong against this new bill, suggest some at the Kativik Regional Government, who plan to watch the legislative debates with interest.

That’s because the Bill 78 also wants to change how all ridings in Quebec are divvied up and alter the rules for donations to political parties.