A near calamity for the MV Avataq

SALLUIT — The MV Avataq, a 113-metre ship owned by Nunavut Eastern Arctic Shipping Ltd., had a near miss with disaster on Sept. 25, when winds exceeding 80 kilometres an hour nearly dragged the disabled ship across the bay near the community of Salluit.

Tugboats had brought the Avataq to Salluit earlier that week.

The Avataq’s engines had broken down about 22 km from the community, causing it to drift for three days in Hudson Strait.

There were 23 crew members and a repair team of four on board at the time the storm hit.

“It was really swept out to sea when there was a strong wind,” said Avataq deckhand Andrew Qammaniq of Pond Inlet.

“We were ready, if and when we touched the seabed, to abandon the ship.”

“All of us were then in an emergency situation and we all fell silent,” said Jolly Ingugu, a deckhand, also of Pond Inlet. “We all became worried what would happen.”

Finally, the Avataq’s anchors hooked on to the seabed, preventing the ship from grounding.

The MV Aiviq, also owned by NEAS, was expected to take on the Avataq’s cargo. 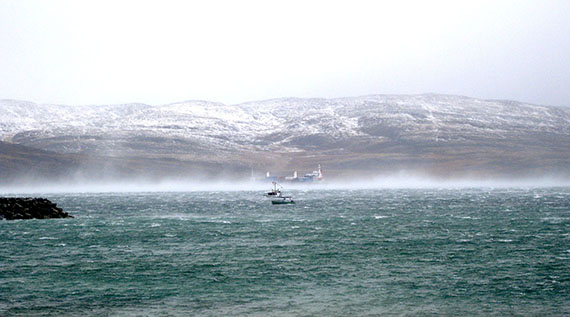 Winds buffet the MV Avataq on Sept. 26 near Salluit, where the ship owned by NEAS had been towed for repairs. (PHOTO BY PUTULIK ILISITUK)