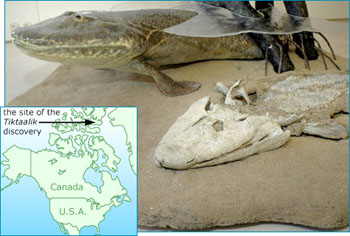 In 2006, researchers from the Canadian Museum of Nature and the University of Chicago discovered fossils on southern Ellesmere Island that revealed the existence of the creature they call “tiktaalik,” believed to be a missing link between fish and land animals. The area that Westar Resources Corp. has claimed contains more than 30 rare fossil sites, scientists said last week.

The Society of Vertebrate Paleontology asked its members to lobby the the Nunavut Impact Review Board about a coal exploration project at several sites on Ellesmere Island.

A firm called Weststar Resources Corp. is proposing to search for coal near an area on Ellesemere called Strathcona Fiord, where scientists have already found ancient fossil records bearing crucial information about climate change and early life on earth.

“They’re rather rare (fossil) deposits for that part of the world,” explained Blaire Van Valkenburgh, the president of the society. “They represent a place and a time that isn’t well represented in the fossil record.”

She said some of the most valuable fossils are about 50 million to 55 million years old, during a time of a major warming shift in the earth’s climate.

Paleontologists study fossils from this time to see how animals and plants adapt to climate change without human influences, she explained.

Strathcona Fiord is also where researchers from the Canadian Museum of Nature discovered the remains of a 300-million-year-old creature called they “tiktaalik.”

Tiktaalik is an animal that likely represents a missing link between fish and land-based animals.

Newer fossils there include some that are three to five million years old, including animals there are ancestors of modern species like bears, horses and beavers.

Mitch Adams, the president of Weststar, said the proposed project arises from the new viability of shipping in the Northwest Passage, as well as new shipbuilding technology.

Adams downplayed paleontologist’s concerns, saying that at this point, the exploration project is small and expected to take only two to three years.

“To think that we’re just coming up there with dump trucks and ruining the fossil record is kind of far-fetched in my mind,” Adams said.

Under their proposal, Westar would set up a permanent camp until exploration is complete.

Referring to the high cost of operating in the High Arctic, Adams suggested a cooperative project with paleontologists.

He said researchers and coal explorers could share the costs of setting up a field camp, to everyone’s benefit.

Van Valkenburgh was responsive to that suggestion, saying on-site paleontologists could work to ensure the most valuable fossil beds remain undisturbed by exploration.

The paleontology society wants its members ask the review board to give Westar’s project a thorough review and perhaps modify or abandon it.

NIRB’s director of technical services said the board has received many such letters, now publicly available on the agency’s website.

“Every comment we receive from the public is given due consideration,” he said.

Fossil deposits, like archeological sites, come under the board’s mandate, he said.