Music student’s project earns an A 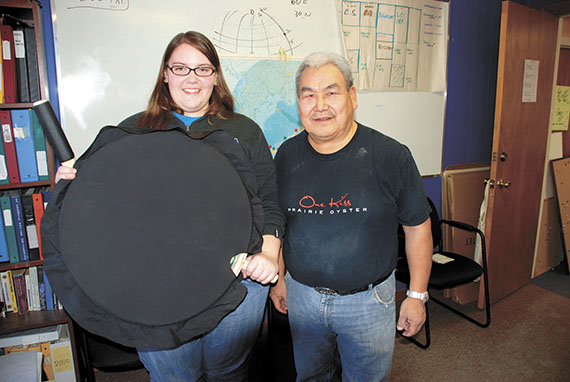 Caitlin Little with her finished drum. With her is David Serkoak, an instructor at Nunavut Sivuniksavut, who taught her how to make the drum. (PHOTO BY GARY LITTLE) 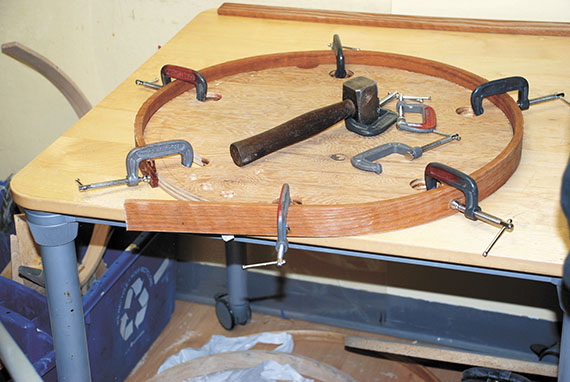 The wood for the drum head being fastened to the template. The wood was softened for two days in a steamer, which allowed the wood to bend. 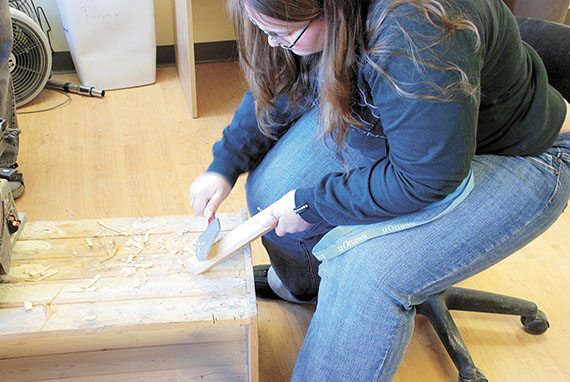 Beginning to shape the beater. The initial forming was done using a hatchet, then sanded to finalize the shape. (PHOTO BY GARY LITTLE) 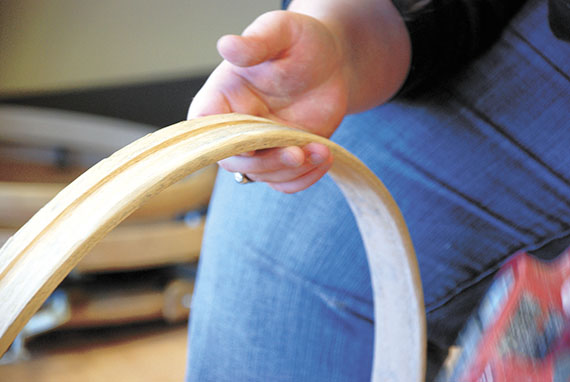 A groove has been cut into the outside of the drum shell. This is to enable the skin to be tied tightly to the wood with sinew. (PHOTO BY GARY LITTLE) 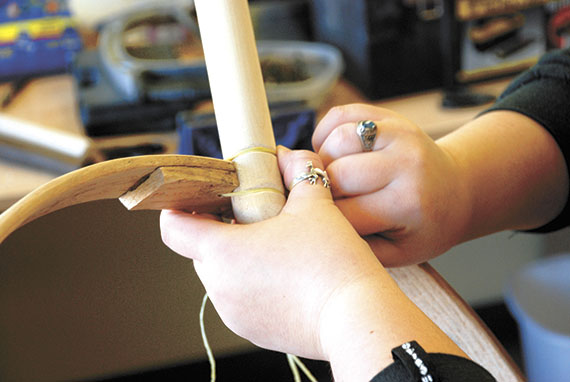 Caitlin attaching the handle to the drum Waxed sinew is used for this step to avoid using any screws. (PHOTO BY GARY LITTLE)

When my daughter, Caitlin, a University of Ottawa music education student, was assigned a class project last year, she knew exactly what she wanted to do.

But the question was how.

The professor teaching the class said their assignment for the semester was to make a playable musical instrument.

Caitlin wanted to make an Inuit drum, or qilaut.

She had always wanted one — Caitlin collects musical instruments from around the world — to add to her collection.

She owns items such as a didgeridoo from Australia, a guitar from Morocco, maracas from Egypt and various instruments from Africa and South America.
She didn’t know where to begin to learn how to make a qilaut.

Although there are many articles on the internet, she was not able to locate information on what materials she needed and how to put them together.

Enter David Serkoak, an instructor at the Nunavut Sivuniksavut program in downtown Ottawa.

After Caitlin got in touch with him, Serkoak agreed to teach her how to make a qilaut.

David told her what kind of wood she needed to make the outer ring of the drum.

The three-quarter-inch by one-and-a-half-inch piece of red oak she bought was cut down to about three-eighths of an inch by one and a half inches by six feet.

And she bought two pieces of oak in case one happened to break.

The trimmed wood was put into a “steamer” for two days. The wood was immersed in hot water, which was changed every three to four hours.

After two days, it was pliable enough to be bent and clamped around a plywood mould to make the circular outer ring. The first one she bent broke after going only part of the distance. The second piece bent just fine.

Now in it’s traditional circular shape, and clamped to the mould, the wood again had to be left for two days for it to dry thoroughly and maintain its drum shape.

While the wood was in the steamer, she made the handle and the beater or katuk. The handle was made from a large piece of dowelling, trimmed and sanded to the required shape.

Then she made the “beater” from a piece of two-by-two lumber, using a hatchet and sander to get it to the proper shape and size.

She attached a small piece of curved wood from the broken piece to the inside of the ring to complete the circle and give it strength when the handle was attached.

She cut a groove into the outside of the rim, so the waxed sinew twine could hold the cover tightly.

A slot was cut in the handle, and two grooves were cut in it. The handle was glued to the rim and waxed sinew used to tie the handle tightly to the rim. This way, there were no nails or screws used in making the drum

The katuk (or beater) had a length of material similar to the drum head wrapped around it about four or five times and nailed to the katuk.

This made the beater more resilient and made for a more mellow sound.

Now the drum head had to be attached. The piece of material was placed on a table and the rim laid over top of it. A piece of twine was wrapped around the outer edge of the rim and pulled taut.

The finished drum made a wonderfully deep sound. The beater made the sound mellow and somewhat soft.

Caitlin’s mark for her project? A solid A, tops in her class.

Since making the drum, Caitlin has used it to teach young students about music from various parts of the world.

Gary Little is a layout artist with in Ottawa for Nortext Publishing Corp., the publishers of Nunatsiaq News.