Nunavut premier: no more poverty by 2030 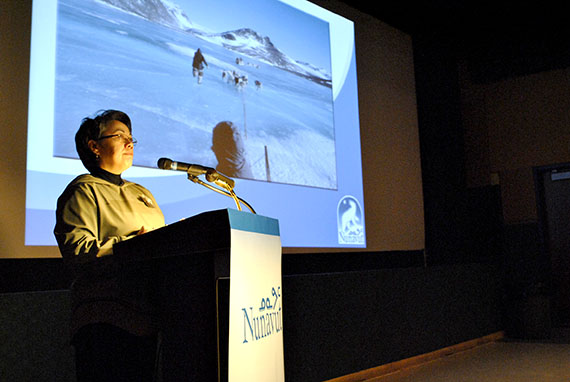 An eye on the future: Premier Eva Aariak, in a speech given Feb. 5 at a speakers’ forum held in conjunction with this weekend’s meeting in Iqaluit of G7 finance ministers, said that by 2030, she envisions a Nunavut where all residents understand the Inuit language, where no one lives in poverty, and where all residents prosper within an economy driven by resource development and the marketing of Inuit cultural production in film, music, literature, art, music, and fashion. “By 2030, no child or family in Nunavut will go hungry,” Aariak said. (PHOTO BY JIM BELL)

In just 20 years, the people of Nunavut will enjoy a secure culture, a prosperous economy and liberation from poverty, Nunavut Premier Eva Aariak said Feb. 5, in a vision statement aimed at reporters and government officials visiting Iqaluit for this weekend’s G7 finance minister’s meeting.

“If this were 2030, everyone would understand what I just said,” Aariak declared after reading the first sentences of her speech in Inuktitut.

She said that in 20 years, her government envisions numerous professional development opportunities for those who are “well-educated in the Inuit language,” including doctors, nurses, engineers and other professionals.

She also foresees a thriving Inuit culture and language, with a healthy level of cultural production that would include films, books, magazines and art work produced by Inuit.

“I anticipate going to see Inuktitut films, books, magazines… will walk the streets of Montreal and will be amazed by all the parkas on sale that are made in Arviat, Rankin Inlet and Taloyoak,” Aariak said.

At the same time, she said Nunavut will have created a social safety net strong enough to have banished poverty from the territory.

“By 2030, no child or family in Nunavut will go hungry,” Aariak said, likely referring to research data from the Qanuippitali health survey that revealed the existence of widespread malnutrition among Nunavut families, especially pregnant women and children.

And she signaled that poverty reduction and early child health will be a priority for the current territorial government.

“A child’s history is usually written in the first months and years of this life… as a society and as a government, we recognize this,” she said.

After the speech, Aariak said her government is still working on developing the anti-poverty strategy that MLAs agreed to in principle this past fall, following the release of the Qanukkaniq report card.

In her speech, Aariak also provided what sounded like a definition of self-sufficiency, a longstanding goal of the Nunavut government.

“The best way to reduce poverty is to ensure that each member of society can take care of their family and community,” she said.

She also said this vision of future prosperity includes a strong mining industry, coupled with a strong traditional economy.

To that end, she said “Nunavut will prove that it is possible to establish an efficient and effective regulatory environment,” she said.

In addition, she said Nunavut’s resource-based economy would be supported by big investments in deep sea ports, roads and railways “to complete the map of Canada.”