“There seem to be a vicious circle that keeps the status of Inuktitut at the level of a symbolic language.” 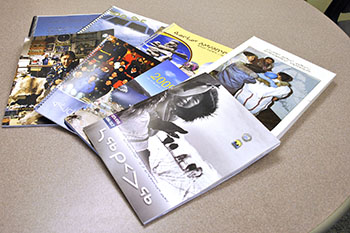 Since the creation of Nunavut in 1999, government and quasi-government organizations have produced huge piles of Inuit language documents, all translated from English. But a Laval University researcher says this has done little to make the Inuit language a functional language of work in government — because few people read or write syllabics well. (PHOTO BY JIM BELL)

Despite its official legal status, the Inuit language will never become a functional language of work unless more people learn how to read and write it, a Laval University researcher said in a recently completed PhD thesis and other articles.

”Inuktitut literacy has lost its footing among most bilingual Nunavummiut,” linguist Aurélie Hot said in an article published last year in the Journal of Canadian Studies.

Between 2005 and 2007, Hot interviewed 11 people in Igloolik, 18 people in Iqaluit, as well as community leaders, government employees and elders living in the two communities.

She said this occurs for three reasons:

• most children don’t get much instruction in syllabics after Grade 3,

• virtually all Inuktitut materials are translations from English originals; and

To fix this, she says the people whom she interviewed recommend three things:

• extending instruction in reading and writing syllabics beyond Grade 3;

• producing more reading material in Inuktitut that people actually want to read, such as stories and historical material; and

• providing more support for adults who want to learn how to read and write syllabics properly.

“The crux of the matter is that the younger people, they don’t really know how to write fluently. They have no opportunity to practice reading and writing and they don’t really have anything interesting to read,” Hot said in an interview last week with Nunatsiaq News.

She said that within Government of Nunavut workplaces, the visibility of Inuit language materials has increased dramatically.

But this doesn’t mean that the GN will achieve its goal of making Inuktitut a functional working language of government by 2020.

“There seem to be a vicious circle that keeps the status of Inuktitut at the level of a symbolic language,” she said.

She said even GN employees who know how to read syllabics are often frustrated by problems with texts that have been translated from English.

“The quality of translation and new terminology are often deterrents to many speakers who end up reading the necessary document in English. For these unsatisfied employees and workers, Inuktitut literacy only has a status of symbolic literacy that is there but cannot be used.”

And she found that the decentralization of GN jobs has not increased Inuktitut literacy and the oral use of Inuktitut within the workplace, even in Igloolik.

“Even if there is a lot Inuktitut spoken, if all the written documentation and all the official writing is all in English, it’s very possible that it is going to affect the choice that you are going to make when speaking, that you might speak a lot more English,” she said.

She also found that even though people in Igloolik speak Inuktitut more often than in Iqaluit, their Inuktitut literacy skills are about the same.

And this is likely to be a significant obstacle to increased use of Inuktitut in the workplace, Hot said.

“You cannot expect people who are not comfortable in the reading and writing of syllabics to start using syllabics to write emails at work.”

She said she found that it’s the generation aged 35 to 44 who possess the least knowledge of syllabics.

People younger than that group are more likely to have learned syllabics in territorial government schools, where old Government of the Northwest Territories began re-introducing the teaching of Inuktitut in the 1970s.

And people older than that group will have likely learned syllabics either from their parents or through reading the Bible and other church material.

But she said the popularity of Pentecostalism in Nunavut means that even religious services are no longer the Inuit language havens they once were, such as in the Anglican church, where Inuktitut is often the only language used.

Hot said she noticed this at a Pentecostal bible study week in Igloolik, held in 2007.

“I could witness a generational language choice: young people were following the discussion of the American minister on an English Bible, and older people would rather have an Inuktitut Bible. The discussions were translated in Inuktitut.”

In one of her articles, Hot rejects the notion that Inuktitut literacy doesn’t matter because Inuit culture is primarily oral.

She points out that the vast majority of Inuit in the eastern Arctic were literate in syllabics by the 1920s, and were using syllabics to write letters and record family events.

And she says many young people would read Inuktitut more often if they could find more interesting material.

“Younger women, for example, were telling me they would like to see a magazine like Cosmopolitan or Vogue in Inuktitut and that would make them read Inuktitut.”

She also said that on their free time, most Inuit young people use the internet to communicate with each other on instant messaging programs and social networking sites like Bebo, using home computers or computers borrowed from others.

So she says Nunavut needs more websites like the one created by the Qikiqtani Inuit Association, www.inuitmyths.com, where young people can read stories and articles in syllabics.

“I think it’s great, really attractive and well-made and really interesting. But it’s a big endeavour requiring lots of resources.”

Scores of delegates are expected to attend a major summit on language policy between Feb. 9 and Feb. 12 in Iqaluit.