Arctic warming will continue, no matter what 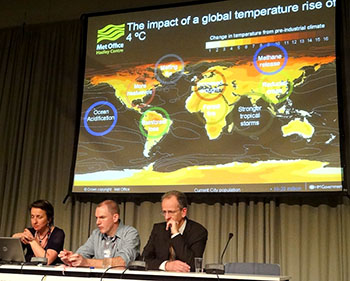 This slide above shows a lot of red at the top: that’s the Arctic, which could warm by as much as 16 C if the 192 nations at this week’s climate change conference in Copenhagen can’t agree on how to curb climate-warming emissions. (PHOTO BY JANE GEORGE)

COPENHAGEN — No matter what the world’s nations do to curb climate change, one thing appears certain: the Arctic is headed for average annual temperatures that will rise 3 to 6 degrees C higher than today by 2100.

As the United Nations climate change conference in Copenhagen heads into its second week, scientists with the Hadley Centre, the UK’s foremost climate change research centre, made that prediction in a side event held Dec. 11, citing it as a best case scenario.

To limit Arctic warming to those levels, thousands of negotiators and their governments must agree to cut to climate-warming greenhouse gas emissions to a point where overall global temperatures will rise by 2 C before 2100.

If they can’t agree to make these cuts or how to help poor countries cope, “business-as-usual” energy practices would see temperatures rise by 4 C globally.

This “business-as-usual” will condemn the Arctic to temperatures from 9 to 16 C higher than today by 2100.

Dark orange and red colours play across the top of a colored map, shown by the centre’s scientists during a side event at the climate change conference.

These stand for the high temperatures that the Arctic will see even with a new best-case global agreement on climate change.

But the emission cuts now under consideration at the meeting won’t lower temperatures below the three-degree increase in temperatures that the Arctic has already experienced, although the cuts would protect the rest of the world from levels of climate change seen already in northern latitudes.

When asked if it would be possible to make cuts so that the temperatures in the Arctic would rise by less than three to six degrees, Vicky Pope, head of the climate predictions program at the Hadley Centre, said it would be “technically not feasible.”

This means the world couldn’t or wouldn’t be able to lower its emissions from power plants, vehicles, factories, ships and airplanes to levels capable of keeping the Arctic cold.

Even while trying to achieve a two-degree Celsius global temperature rise, with “early and rapid reductions” in emissions cuts now, and a stabilization of emissions by 2016, there’s only a 50-50 chance the increase will remain below the two-degree goal.

The global temperature may rise by as much as 3 C more, and much of that additional rise will be in the Arctic.

And scientists aren’t sure yet whether permafrost melt, which could release methane, a potent greenhouse gas, into the atmosphere, will pump temperatures even higher.

Until mid-century, the temperatures will continue to be rise and may stay warm for 100 years or more while the impact of the cuts kick in, the Hadley Centre’s scientists say.

If the world waits until 2030 to take any action, the global temperature will increase by 4.5 C and by up to 5.5 C over land, bringing a host of “dangerous” impacts, such as the near-total melt of the Greenland ice sheet.

If the world dithers, it will require greater cuts to cool it down, and there will be even more uncertainty about the impacts, say the scientists.

To feel the warmth, people can look ahead to the New Year because the Hadley Centre predicts 2010 will be the warmest year since 1998, a record-breaking year for global heat.