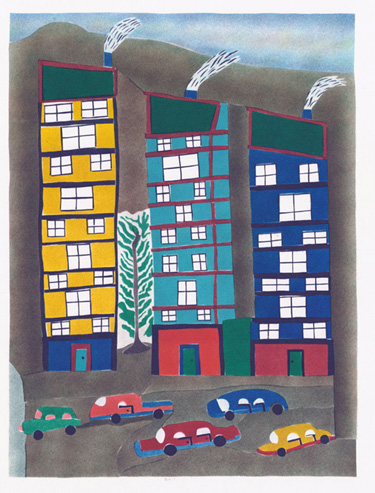 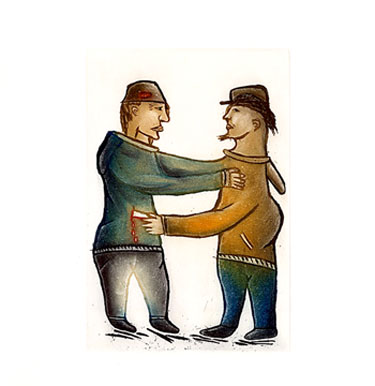 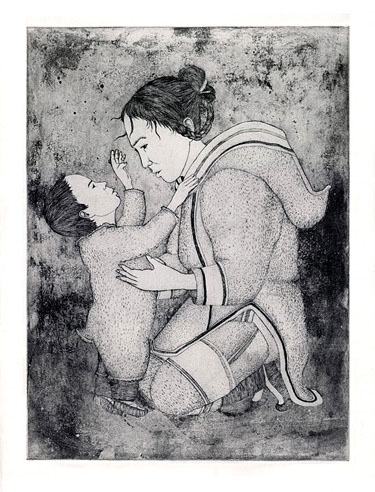 After a one-year hiatus, the Pangnirtung print collection is back with a series of works that mark a major shift from previous years, with new artistic methods and new subject matter.

As new manager Kyra Fisher took over the reins, 2009 became a year of transition for the Uqqurmiut Arts Centre.

No collection came out that year, but Fisher said artists at the centre took advantage of the down-time to develop new ways to think about Inuit art and printmaking.

From September, 2009 to March, 2010, Pang artists took part in a series of six workshops, with master artists, including Iqaluit’s Danny Osborne, instructing them in drawing, painting and printmaking techniques.

“They had to draw from real life, and that is not normally done up here,” Fisher said during the opening of the 2010 collection at Iqaluit’s Nunatta Sunakkutaangit museum Nov. 26.

“You’ll see some images that some people might find a bit shocking.”

Two of those such images come from Piona Keyuakjuk. Self-defence is a simple image of two men standing fact-to-face as one has his hands on the other’s shoulders as the second man plunges a knife into the first’s side.

Witness is a harrowing recreation of an event that’s all too common in Nunavut, with a hooded figure pointing a rifle at a man on his knees with his hands in the air making a “don’t shoot” gesture.

“Piona actually saw somebody pointing a rifle at somebody,” Fisher said. “Nobody was shot… but he saw that.”

Brian Lunger, manager of the Nunatta Sunakkutaangit museum, said the collection strikes a balance between the traditional Inuit scenes that are often favoured by southern collectors of Inuit art and works that reflect the often-hard reality of life in Pangnirtung.

“I hope that people respond positively to it because I think it’s very real and very authentic and as beautiful as anything else,” Lunger said.

Keyuakjuk also offers some gorgeous woodcut prints, like Winter Day, a simple, two-tone rendering of an igloo scene with a kakivak, harpoons and a face peeking out of the door.

“He’s basically a carver and it’s very unusual to have a carver who will actually get into two-dimensional art,” Fisher said.

Then there’s the bold, colourful work of 84-year old Elisapee Ishulutaq, who contributes two contrasting urban views: one, a pretty scene of Pangnirtung looking down from the surrounding hills, and a streetscape of downtown Vancouver, complete with condominiums, cars and the city’s famous mountains rising in the background.

The latter print came from Ishulutaq’s trip to British Columbia for an exhibition. During a workshop there, Ishulutaq composed a 24-foot long oil crayon drawing about her life.

“She was sitting on the floor the whole time,” Fisher said. “She’s incredible.”

Even Andrew Qappik, perhaps best known for his colourful prints featuring polar bears and scenes from nomadic life, steps away from his usual approach. Boy depicts a head-and-shoulders image of young man in a young man in a parka, but the sugarlift process gives the work a haunting, smudged-out, abstract quality.

But Qappik doesn’t wander too far from his more familiar style. Akuluk (Term of Endearment), is a breathtakingly intimate etching of a young mother preparing to put her child in her amautiq.

And there still plenty of scenes of traditional camp life, like prints by Geela Sowdluapik ( Young Woman Pulling A Sled) and Joanasie Papatsie (Moving Away from Umanarjuarq).

Prices for works from the 2010 Pangnirtung print collection range from $125 to $650. The collection is on display at the Nunatta Sunakkutaangit museum in Iqaluit until Jan. 16.