Nunavut makes do with hand-me-down infrastructure

“We patch it up, we fix it ourselves” 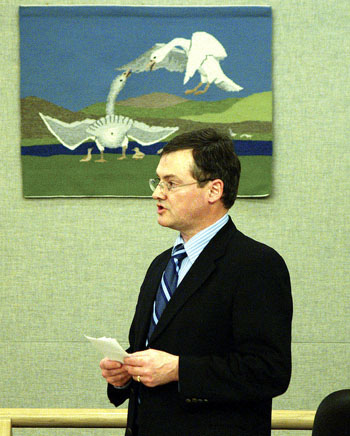 Finance Minister Keith Peterson says that for the foreseeable future, the Government of Nunavut will be totally dependent on the federal government for money to run programs and build infrastructure. (FILE PHOTO)

Keith Peterson likens the Government of Nunavut, facing massive infrastructure needs and little money to pay for them, to an old car.

“We patch it up, we fix it ourselves,” Nunavut’s finance minister said after tabling a $122.5-million capital plan in the Legislative Assembly Oct. 19.

“I know that’s not a good way to keep a government working but until we get a major infusion of cash to invest in upgrading our infrastructure of Nunavut, we’re going to have to keep the infrastructure working.”

Those needs include hundreds of millions of dollars for transportation, power generation and municipal responsibilities like solid waste and water services.

At a recent infrastructure conference in Iqaluit, some speakers urged Nunavut to explore public-private partnerships and suggested the territory coordinate with the Canadian Forces and the mining industry on infrastructure.

In a speech, Premier Eva Aariak said she’s open to such partnerships, but called on Ottawa to step up with more money for infrastructure.

“Consider it a shift from ‘and’ to ‘or,’” Poilievre said, meaning Nunavut will have to pick from a list of priorities, expect funding for the biggest needs, and wait on everything else.

But Nunavut’s position is that massive up-front infrastructure spending by Ottawa will allow Nunavut to develop a bigger economy that’s based less on government employment and more on private industry.

Throw in a devolution deal that would allow Nunavut to earn royalties from resource industries, in addition to increased tax revenues, and Nunavut could work its way out of being a financial ward of the federal government.

Or so the theory goes.

Earlier this month, the NWT government reportedly reached a devolution agreement-in-principle with Ottawa, which would give the GNWT control over federal lands — and rights to the water and minerals in those lands.

Some MLAs and First Nations leaders in the NWT slammed the deal, over concerns it would make aboriginal governments subservient to the territorial government, but that won’t be a problem in Nunavut, where the Inuit land claim is settled.

Aariak said Oct. 20 that the GN is ready to negotiate with Ottawa on devolution, but the federal government has yet to appoint a negotiator.

“We’re ready,” she said. “We’ve had a negotiation mandate for a few years.”

In the mean-time, Nunavut’s premier said the GN is readying a communications plan to tell Nunavummiut more about Nunavut’s devolution pitch.

“I’m finding since I got this job that not a whole lot of people know what devolution is,” Aariak said.

As it stands now, Peterson is blunt when asked about Nunavut’s prospects for financial independence from Ottawa.

“We’re going to be totally, totally dependent for the foreseeable future on Ottawa,” he said.

Peterson said the federal government’s looming cutbacks aimed at tackling a $55-billion deficit also raise concerns about how much money will be available when Ottawa and the territories meet to work out a new Territorial Formula Financing agreement when the current deal expires in 2014.

“From what I hear everything’s on the table,” he said. “It’s impossible to predict the outcomes.”

Eighty-five per cent of Nunavut’s annual budget comes from the TFF accord and a further eight per cent comes from a smattering of other federal programs.

Compounding the problem, Peterson said, is an estimated $600 million in infrastructure needs among Nunavut’s municipalities. Nunavut spends roughly $120 million per year on capital projects across the territory.

Combine that with the territory’s lingering need for even more public housing, he said and it’s impossible to catch up.

And even when the federal government comes to the table, “negotiations are very complex, complicated and can take a long time,” Peterson said.

The NWT’s agreement-in-principle on devolution offers little short-term hope for Nunavut, he added, when the territory still has to expand its financial management expertise and fix huge staffing problems.

“It’s taken decades (for the NWT) to get to where they are.”