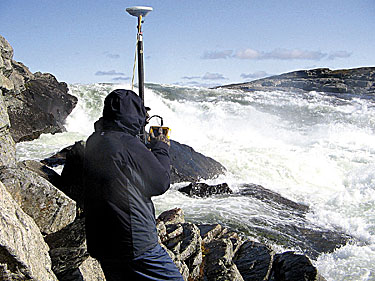 The Inukjuak River’s powerful waterfalls and rapids may someday serve as the site of a hydroelectric project that will supply all the power the community of Inukjuak needs. (COURTESY OF PITUVIK LANDHOLDING CORP.)

People in Inukjuak vote this week on whether they want a hydroelectric project constructed outside their community.

Called Innavik after the Inuttitut word which means “a pouch in which one would keep a stone flint and moss to start a fire,” the $67.5-million project involves the construction of a small dam across the Inukjuak River, about 10.3 kilometres from the community, and the build-up of a reservoir behind the dam.

The small hydro plant would generate about 7.5 megawatts of electricity

But for Innavik to move ahead, at least 75 per cent of eligible voters over the age of 18 must vote in the March 23, 24, 25 referendum, held during working hours at the local co-op store.

Sixty per cent of those who vote must be in favour of the project.

“Even if it’s approved, there are some conditions that will have to be met,” said Eric Atagotaaluk, the president of the local Pituvik landholding corporation, which is leading the project, along with the provincial power corporation, Hydro-Quebec.

The Kativik Environmental Quality Commission will conduct an environmental assessment on Innavik, and an environmental impact study has already been presented to the provincial and federal governments and other organizations, Atagotaaluk said.

Hydro-Quebec wants to Innavik go ahead because the project will save it money.

Electricity in Nunavik is sold at the same rate as in the South, but costs 10 times more to produce, due to the high cost of transporting diesel fuel.

A feasibility study showed Innavik would be able to meet the electricity and heating needs of Inukjuak, population 1,200, for at least 20 years.

But the pros and cons of building Innavik have sparked a community debate on the local FM radio that “has been heated at certain times,” Atagotaaluk admits.

Callers worry about the environment, he said, because they’re concerned about maintaining the water quality how the project might impact fish populations or raise mercury levels.

Those who favour the project claim there is nothing but sculpin and other rock-fish like that in the river, which is not true, the elder said.

A strong argument in favour of Innavik is its economic impact in the job-starved community, which has the highest number of welfare recipients in Nunavik.

The construction of the dam would create 100 new jobs.

And locals will be favored over others for the construction of structures as well as other related activities.

Artists will be also involved in the architectural design of certain components, according to information posted on the project’s website at www.innavik.com.

As well, a “significant proportion” of profits coming from sale of hydroelectric energy would be reinvested in local project development for the Inukjuak community.

When Innavik is in operation, 20 to 30 people would find longer-term employment, Atagotaaluk said.

“We’ve got the highest unemployment rate in the region and the lowest number of available jobs,” Atagotaaluk said.

“That was our highest motivation to initiate a project a project by and for the community, to help tackle that issue. And we’re at the stage where we can do that. But we want to have the community vote on this now.”

If Innavik moves ahead, the same company that built the La Grande-2 dam, Groupe RSW, would build the dam, but its generating capacity would be 7.5 MW.

That’s fraction of LG-2’s production of 5,328 MW, yet still more than enough to power Inukjuak and supply most of its heating needs.

The plan is to install two or three turbines in a powerhouse on the Inukjuak River at the Katattukallak rapids and waterfall, where water will be diverted through a channel and into the powerhouse.

As water runs through its turbines, the movement will be used to generate electricity.

The diverted flow of water will be returned to the river through a channel, which will discharge at the foot of the dam.

Water levels downstream of the project site should remain unchanged during operation, says the project’s environment study, which also says water quality will not be altered as a result of the water’s passage through the turbines.

Any increase in water levels takes place upstream from the dam at Lake Qattaakuluup Tasinga, according to the study.

But it says fish and fish habitat will be protected by the placement of a protection system at the entrance to the turbines and the creation of spawning habitats.

Water quality will remain the same as in pre-construction conditions and the bioaccumulation of mercury in fish is not expected to occur, the study states.

A new bridge will permit continued community access via all-terrain vehicles to the south shore of the lake and a ramp will be also built boat launching.

If approved in this week’s referendum, the $12-million equity needed for Innavik is likely to come from Pituvik, Makivik Corp., joint-venturing and federal government funds.

Studies show that it will return this investment at a rate of about 30 per cent a year, so the hydro-electric project will be able to pay for itself within its first five years.

Hydroelectric mini-projects have already been built in other communities in Quebec, such as the one-megawatt station in the James Bay Cree community of Wemindji built on the Maquatua River in 1985.

If Innavik is built, Inukjuak will also reduce the amount of greenhouse gas emissions it produces by an estimated 8,000 tonnes of CO2 emissions during the first year of operation and up to 15,000 tonnes after 10 years.