“They’re doing this to other Inuit too” 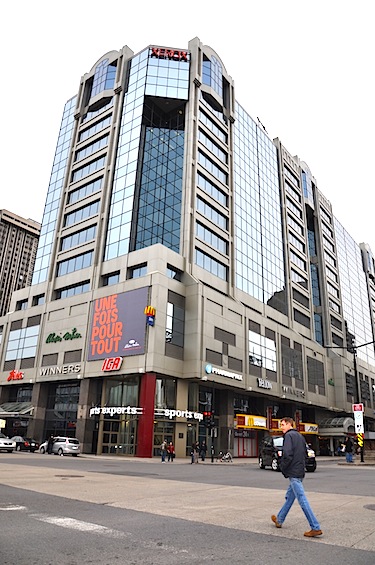 A Tasiujaq woman and her boyfriend security guards at the Alexis Nihon mall have abused Inuit and nor responded to their complaint of mistreatment. (PHOTO BY SARAH ROGERS)

A Tasiujaq woman says she won’t return to a downtown Montreal shopping centre until security guards there apologize for making racial slurs against her and other Inuit in the neighbourhood.

Rebeccca Kritik, a Nunavik teacher who splits her time between the North and the South, told Nunatsiaq News she filed a complaint with the security company at Montreal’s Alexis Nihon shopping centre, in which she alleged that she suffered verbal abuse and discrimination.

Kritik said she was leaving a fast food restaurant in the mall at Maisonneuve Boulevard and Atwater St. last February with her boyfriend, Richard Ward, when security guards at the centre called her an “Inuk bitch” and “slut.”

When Ward confronted the guards, they kicked the couple out, Kritik said.

“They’re not just doing this to me,” Kritik said. “They’re going this to other Inuit too.”

The couple was at the mall to do some shopping, Kritik said. Ward accompanied her because she recently underwent back surgery.

Ward, who is not an Inuk, claimed he has seen many urban Inuit in the neighbourhood being verbally and physically abused by security guards at the same shopping centre, which lies near the new Nunavik House, located at the YWCA residence on Tupper St..

“Inuit already have a tough time at the YMCA,” he said. “They don’t need to put up with the guards harassing them.”

Many homeless Inuit have also been targeted, Ward said, alleging he has seen guards tease one toothless man, knock the hat off another and throw an Inuk woman from Puvirnituq down the stairs because she had “blacked out” at the shopping centre.

“Why didn’t they just call the cops, or an ambulance?” he said.

Pascal Gagné, the head of the security company at Alexis Nihon, did not return calls seeking comment about these alleged incidents from Nunatsiaq News.

Since the couple filed their complaint earlier this month, they say they have yet to hear from the security company.

Until then, Kritik plans to stay away from Alexis Nihon.

“It definitely makes me nervous,” she said. “I don’t want to go back to the shopping mall unless they apologize.. And I don’t want this to happen to other Inuit people.”