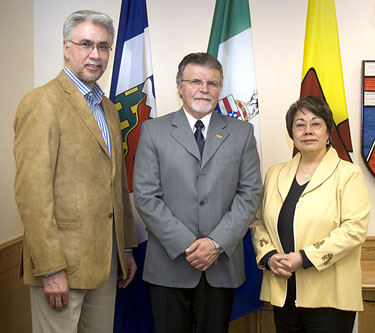 Northern premiers wrapped up their annual forum in Yellowknife April 28 with a call for more funding to pay for alternative energy.

The premiers released two papers, an inventory of renewable energy in the three territories and a pan-territorial climate change adaptation strategy.

Nunavut has a small wind turbine producing power in Rankin Inlet and plans for a wind-hydrogen-diesel power plant in Cape Dorset, but so far the territory has focussed on residual heat and energy efficiency projects to reduce power consumption.

Nunavut premier Eva Aariak said Ottawa will have to step in if the territory is ever to build larger-scale clean energy projects like hydroelectric dams.

“Territorial dollars cannot cover the high cost of hydro and other green energy initiatives, so we would still very much need to have a dialogue with the federal government,” she told reporters.

Federal Conservative candidate Leona Aglukkaq has promised to push for a hydroelectric dam for Iqaluit and a power line connection between the Kivalliq and Manitoba, despite claims by her Liberal and New Democratic opponents that there’s nothing in the Tory platform for such projects.

Aariak sidestepped a question about whether she thought Aglukkaq would come through with that promise, but Yukon Premier Dennis Fentie, who announced last week he’ll soon be leaving territorial politics, said the Conservative government gave his territory millions to fund hydroelectric projects.

“The Yukon can be held up as an example on the commitments made by the Harper government and what they delivered,” he said.

“It’s that type of work we’re using and building on when we’re building our business case with our federal partners,” Roland said.

Meanwhile, Nunavut is working on a follow-up to the 2007 Ikummatiit energy strategy that will compile a list of existing and potential renewable energy resources in the territory.

The northern premiers also discussed a grab-bag of other issues.

On devolution, all three premiers called again on Ottawa to appoint a negotiator and get started on crafting a devolution deal with Nunavut.

The premiers also release a communiqué, which said they discussed ways to ensure Canada’s upcoming chairmanship of the Arctic Council, which starts in 2013, “reflects the interests of northerners.”

They also called for an extension of the $30-million-per-year Territorial Health System Sustainability Initiative, predictable housing funding from the Canada Mortgage and Housing Corporation, and federal help covering policing costs.

The premiers’ communiqué and their two papers on renewable energy can be found at online.