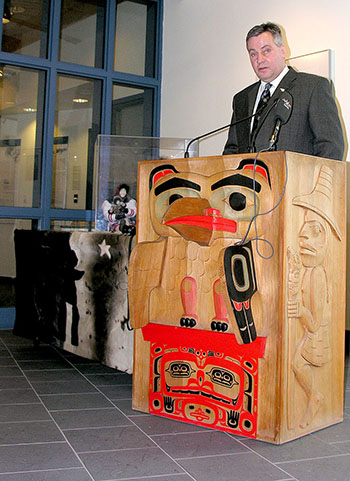 Dan Shewchuck, the Nunavut environment minister, announced March 5 that the annual harvest quota for Baffin Bay polar bears will fall from 105 to 65 over four years, starting this July 1. (PHOTO BY GABRIEL ZÁRATE)

Dan Shewchuk, the Nunavut environment minister, announced March 5 that the annual hunting quota for the Baffin Bay sub-population of polar bear will drop from 105 to 65 over the next four years.

Since 2004, 105 polar bear tags have been distributed every year to hunters and trappers organizations in Clyde River, Pond Inlet and Qikiqtarjuaq.

This July, the Government of Nunavut will issue only 95 tags.

After that, the quota will drop by 10 tags a year until the annual quota of 65 is reached.

But Shewchuk said the GN won’t compensate hunters, nor was compensation part of the GN’s discussions with the federal government on the matter.

Shewchuk said that when the Baffin Bay quota rose from 64 to 105 in 2004, Nunavut did not know how many bears from the population were harvested by hunters from Greenland.

After Greenland released its estimated harvest numbers, biologists became concerned that the population was being overharvested.

“Our management must respond to the best possible information we have on a population at any given time,” Shewchuk said.

Greenland has since reduced its annual take.

Shewchuk said he thinks lowering the quota will convince the federal government to reconsider its moratorium on the export of polar bear parts harvested from Baffin Bay bears.

“We hope that by us taking this action to Environment Canada, we can lift the ban sooner rather than later,” he said.

At his March 5 press conference, Shewchuk said he was currently drafting a letter on the issue to Jim Prentice, the federal environment minister.

At the same time, the decreased hunt will likely boost Canada’s case at a conference of the Convention on International Trade of Endangered Species in Qatar next week.

Nations attending that meeting will decide whether to classify the polar bear as an endangered species and outlaw international trade in their products.

Gabriel Nirlungayuk, NTI’s director of wildlife, argued the GN’s decision is based on “flawed science,” because the field research on the Baffin Bay polar bear su-population was done in 1997.

Neighbouring populations like Foxe Basin are increasing and even scientists admit it, he said.

Reducing the quota, Nirlingayuk said, only makes sense if polar bears don’t travel and each population is a self-contained unit.

“But on the ground it doesn’t make sense, when you have to fend off polar bears day after day after day,” he said.

Shewchuk said the GN is planning new research projects to produce a new population estimate by 2014.

And Shewchuk acknowledged that the GN’s quota decision would not be popular with hunters.

“The communities aren’t happy about the direction we’re taking, but all stakeholders were involved in coming to this decision,” he said.

The process of changing the quota involved more than a year of meetings with Nunavut Tunngavik and the affected hunters and trappers organizations. and other participants

At a public hearing last fall, organized by the Nunavut Wildlife Management Board, hunters from the affected communities threatened a revolt against any reduced quota.

Joe Maktar, manager of the Mittimatalik Hunters and Trappers Organization in Pond Inlet, said that he has heard that reducing the quota might mean the end of the federal government’s export ban.

He said his organization’s members are now looking at how to respond to the new quota.