Strahl to ponder list of names supplied by premier, MLAs 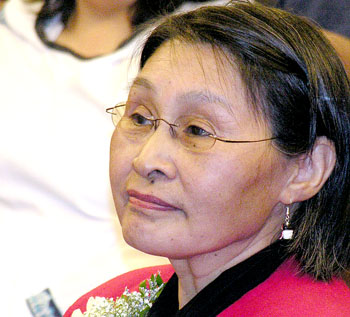 Ann Meekitjuk Hanson of Iqaluit, who has served as Commissioner of Nunavut for the past five years, saw her term expire quietly April 10. The federal government is expected to soon name her successor. (FILE PHOTO)

Nunavut’s new commissioner will be appointed “shortly,” a spokeperson from the office of the Nunavut premier said this week.

On April 9 Indian and Northern Affairs Minister Chuck Strahl told Premier Eva Aariak that he was in the final stages of selecting who will succeed Ann Meekitjuk Hanson as commissioner.

Aariak’s press secretary, Emily Woods, said the premier polled the other MLAs for suggestions of names for Strahl to consider.

Woods said the list of names “spanned the entire territory.”

One of Hanson’s last acts in office was to give Commissioner’s Awards to seven Nunavummiut who have done exceptional things:

• Elisapi Aningmiuq has been teaching cultural skills the people of Kimmirut for 20 years;

• Kanajuq Ipeelie, who rescued Hanson’s young daughter Koovianatukuluk Hanson Flanagan out of a deep spring puddle in May 1972. Ipeelie’s daughter, Okalik Curley, accepted the award on her late mother’s behalf;

• Lizzie Kelly, who has served as Iqaluit’s Elders’ Coordinator since 1994;

• Eric McNair-Landry, who pulled a boy, Pauloosie Ipeelie, into his canoe out of the water behind the Unikkaarvik Visitors’ Centre in Iqaluit in August 2005;

• Sandy Oolayou and Jacob Shaimayuk, who risked their lives to save their hunting companion, Jetaloo Kakee, who fell through the ice of Ward Inlet in December 2008.

Hanson declined to comment on the completion of her term.

Until a new commissioner is appointed, the role of the office will be filled by Deputy Commissioner Nellie Kusugak.