ITK president said to be on Harper’s short-list 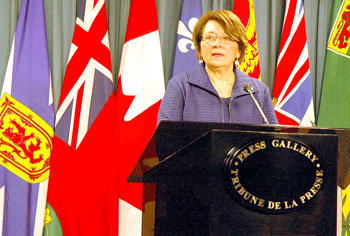 Will Mary Simon, now president of Inuit Tapiriit Kanatami, become the first Inuk to serve as Governor General of Canada? Speculation is mounting that she’s made it to the prime minister’s short-list. (FILE PHOTO)

Speculation is mounting that Mary Simon, president of Inuit Tapiriit Kanatami, could be a contender to replace Michaelle Jean as Canada’s Governor General.

Jean is now in the fifth and final year of her term, which means Prime Minister Stephen Harper will soon have to appoint a successor.

“Her invitation to join the VIP circle at a Winter Olympics reception… along with Ms. Jean and Mr. Harper was interesting if not indicative of any future appointment,” Martin wrote.

Simon is currently on leave as president of ITK, although she did travel to Vancouver for the opening of the Olympic Winter Games earlier this month. Pita Aatami, president of Nunavik’s Makivik Corp., is filling in as acting president.

That change was never announced by ITK and didn’t become public until Aatami penned a letter to Nunatsiaq News on an unrelated matter and signed it as ITK’s acting president.

But an ITK employee said Simon’s leave is to spend time with a sick family member and she’ll be back on the job by early March.

“Mary is still the president of ITK but she’s spending some time with her family,” the source said, speaking on background and emphasizing Simon’s leave has nothing to do with the looming vacancy at the Governor General’s office.

The source said it was a “valid question” why Aatami’s interim presidency wasn’t announced publicly but added “it’s not earth shattering news.”

Martin reports that Simon would be “gung ho” to take on the job as the Queen’s representative in Canada, although she would have to brush up on her French.

Simon has experience as Canada’s circumpolar ambassador — a position the Harper government scrapped — and ambassador to Denmark.

She’s also served as a constitutional advisor and as chancellor of Trent University.

But Harper has placed great emphasis on Arctic issues during his government and appointing Canada’s first Inuk Governor General would be a highly symbolic act.

Harper has also suspended Parliament twice in a little over a year, once to stave off a potential coalition government proposed by the Liberals, NDP and Bloc Quebecois, and again this past December, controversially, to “recalibrate” his government.

So whoever the new Governor General is, they’ll have to know their constitutional law and Parliamentary precedent.

Robert Bothwell, a history professor at the University of Toronto, said any potential Governor General also needs to be energetic, willing to travel and in good health.

Simon, he said, could be a good candidate for the job if Harper wants to cement a legacy as an Arctic prime minister.

“The only person who knows the answer is Harper,” Bothwell said.

Bothwell said the last two governors general, Jean, born in Haiti, and Adrienne Clarkson, born in China, were both chosen in part for symbolism, as immigrant women who came to Canada and built successful public careers.

Clarkson, he added, campaigned relentlessly for the job.

Canadians won’t know who the new Governor General is until July 2, when Jean’s fifth anniversary as vice-regal passes.

As an added potential twist, Queen Elizabeth II will tour Canada from June 28 to July 6.