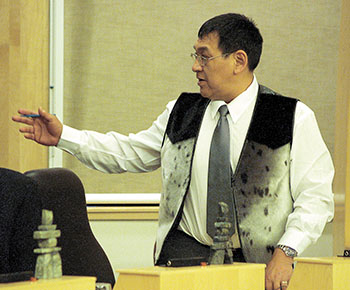 Enuk Pauloosie’s short career as MLA for Nattilik ended Feb. 22, when he resigned his seat the legislative assembly. The speaker of the house is likely to announce a date for a by-election soon. (FILE PHOTO)

Enuk Pauloosie, who was elected MLA for Nattilik in the Oct. 27, 2008 territorial election, quit his seat in the Nunavut legislative assembly Feb. 22.

Pauloosie communicated his decision in a letter to the speaker, James Arreak, but Pauloosie’s correspondence did not state any reason for the decision.

On June 4, 2009, MLAs voted to suspend Pauloosie from the spring session of the Nunavut assembly, without pay, for being “persistently absent without reasonable explanation from meetings of the Legislative Assembly’s committees and caucuses.” Pauloosie then returned to Iqaluit for the fall session of the assembly.

A news release from the clerk of the legislative assembly, John Quirke, said a by-election must be held within six months to fill the vacant position and that the speaker will soon announce a date for that vote.

Pauloosie’s Nattilik seat was previously held by Leona Aglukkaq, now the MP for Nunavut and the national health minister. Pauloosie took the seat with 34.5 per cent of the vote.