Nunavik may get region-wide vet service by 2012 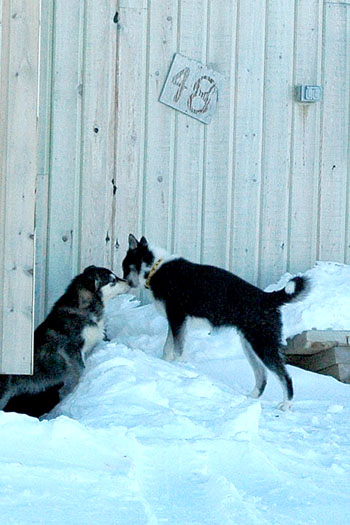 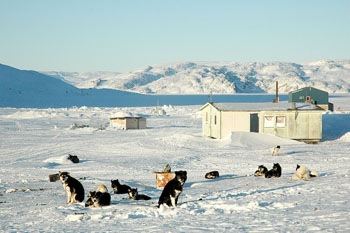 Some mushers in Nunavik say they would rather pay a couple hundred dollars to have their dogs sterilized locally, a price that easily triples if they send an animal south for veterinary care. (PHOTO BY SARAH ROGERS)

KANGIQSUJUAQ — If every dog is meant to have its day, then regular veterinary care just might become a reality in Nunavik.

Animals and their owners could benefit from on-site veterinary services as soon as 2012, including canine and feline sterilization.

That’s because the many organizations that work to deliver care to animals – mainly dogs — in the region are joining forces to improve regional services.

“It’s a long process to put this all together,” said Cecile Aenishaenslin, with the Université de Montréal’s veterinary medicine department.

“People in Nunavik have been asking for more veterinary care and we want to pull all our partners together and harmonize services.”

Along with the vet program, the project groups other organizations who have offered their financial or technical support to animal care in Nunavik over the years, including the World Society for the Protection of Animals, Veterinarians Without Borders, Canada’s public health agency and local partners like Makivik Corp., the regional health board and the Kativik Regional Government.

The project’s lengthy title and equally long list of stakeholders might only reflect the thorny issue of dog population management in the North.

There is disease, which can be transmitted to other animals — and in some cases, to humans.

And there are basic health care needs created by chronic disease or injury, not to mention the social problems associated with an overpopulation of dogs, many of whom roam freely in the region’s villages.

The next step in the project is to establish veterinary clinical services in Nunavik, Aenishaenslin said, which would be staffed by interns from the university faculty.

A pilot ambulatory clinic could be operating throughout Nunavik within a couple years, she said, if the project can find the manpower and funding it needs.

In the region’s villages, the need for better animal care is growing, some say, along with the popularity of keeping sled dogs or companion animals.

In Kuujjuaq, municipal manager Junior May has been part of the discussion with project partners.

Although there are veterinary clinics that regularly visit the region, May said this is the first time the municipality has pushed for a permanent program that would deliver region-wide veterinary care.

“The one thing I was stressing was that we need a travelling operation, one that can do spaying and neutering,” May said. “That would really help with the stray dog population.”

The World Society for the Protection of Animals estimates that in six years, a pair of dogs and their offspring can produce 67,000 puppies.

“They multiply so quickly,” May said

May does not hide the fact that he has a personal interest in better care for the region’s dog population; for the last 13 years, this well-known musher has managed dog teams. Keeping them healthy has not been easy, he said.

“I’ve sent dogs down south to a veterinarian in Dorval for care, but it’s pretty expensive,” May said. “We don’t have [the means] to do minor procedures up here, like stitching or setting broken bones.”

Expensive, indeed. Even with subsidized flights for beneficiaries’ dogs, the total cost for travel, veterinarian care, medication and lodging for one animal can run the owner $1,000.

Ideally, May said, a travelling veterinary program could visit Nunavik communities a couple times a year, set up in local garages and offer spaying and neutering as well as basic health exams.

That would be costly, May acknowledges, noting the program would have to be heavily subsidized.

“A lot of people wouldn’t mind forking out a couple hundred bucks rather than paying a thousand to send their dogs down south,” he said. “I know other sled dog owners who would do the same.”

Some mushers say that sterilizing females before the annual racing season would help improve training and performance, because it tends to be time when females go into heat, which creates distractions within a team.

But today, dog owners must wait for a rare visit from a volunteer veterinarian for anything more than a vaccination.

Vaccination clinics offered by Quebec’s agriculture department are one of the few mainstay veterinary services in the region.

The department has an agreement to protect the population against rabies, by providing vaccines and educating local municipal staff to administer vaccines in their absence.

“Rabies is a very serious disease, it can kill very fast,” said Isabelle Picard, a veterinarian with the department. “If someone is bitten by a rabid dog, they must be treated right away.

There are not vets there regularly and that complicates things.”

Vaccines against other canine viruses common to the North, such as distemper and parvovirus, are also administered.

Spaying and neutering has never been part of the department’s activities, Picard said, but its veterinarians do provide basic health exams on animals during their visits and provided support to municipal staff on how to humanely euthanize animals.

Quaqtaq musher Harry Okpik has been trained by the same program on how to administer vaccinations. Now he serves as an unofficial care provider to animals in his community.

Although Okpik has kept sled dogs for several decades, it wasn’t until he lost nine of his dogs to distemper that he started to see the benefits of caring for his animals’ health.

He’s happy to help when he can, but Okpik still stresses the need to have a qualified veterinarian on hand.

“Veterinary care is very important if you want to maintain healthy dogs,” Okpik said. “I’ve been attached to dogs for many years… and it’s important for an owner to be able to identify what is wrong with their dog.”

In that sense, Okpik thinks mushers could benefit from basic care training — the annual Ivakkak race’s winning teams tend to be made up of dogs who are the best cared for, he argues.

Forming an association of regional dog mushers is one way he and his fellow dog owners can support each other, he said, more than just once a year when they gather at the rave event.

And mushers are a target group for Aenishaenslin as she helps develop a model that can work for Nunavik. In the short term, a survey will be conducted to gauge dog owners’ interest in sterilizing their dogs to ensure it’s a required service.

Aenishaenslin is also looking for funding sources to carry the project forward. Over the next two years, efforts to get the pilot vet clinic off the ground are estimated to run more than $220,000, not including the costs of actually operating the clinic.

“We’ve found funding at least to travel,” she said, “but it’s a challenge to get all the equipment together and find vets who are willing to travel to the region regularly.”

In the meantime, Nunavimmiut who have questions or concerns about animal health can contact the Université of Montréal’s veterinary department for free advice at (514) 345-8521 extension 0065 or by email at nunavik-giv@medvet.umontreal.ca.