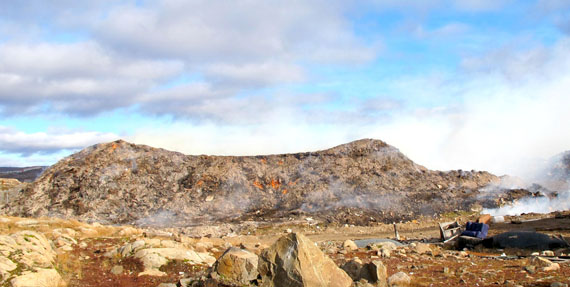 A crust of ash caps the smoldering construction debris pile at the Iqaluit landfill on Sept. 26. The Iqaluit fire department is unable to extinguish the fire and is now only able to contain it. (PHOTO BY GABRIEL ZÁRATE)

The fire at Iqaluit’s landfill could continue to burn for months, the city’s fire chief said Sept. 27 at an emergency city council meeting.

Firefighters and public works staff started fighting the blaze at 2:30 a.m. Sept. 24, but after six hours they had to admit that containment was the best they could do.

Thick, toxic smoke pluming into the pre-dawn darkness made for poor visibility as they fought the blaze, increasing the danger.

“It was impossible to extinguish,” said Iqaluit Fire Chief Walter Oliver. “You don’t have any options at that point.”

The burning pile is 25 to 30 feet high and its walls are steep. Now that it’s on fire, it’s unstable and could collapse at any time, Oliver said.

So firefighters and public works staff put their lives at risk every time they get close to it, he told the councillors.

Another obstacles lies wintin the layout of the dump, where the horseshoe-shaped pile leaves little room for heavy equipment to operate in.

A layer of ash now encrusts this pile, shielding it from fresh air and limiting the speed of the burn.

“It’s thousands of degrees in there,” Oliver told city councillors. “As soon as you disturb that crust you introduce a rush of oxygen, of fresh air, and it flares up.”

If the fire was smaller, public works heavy equipment operators would dig open the pile, so fire department pump trucks could douse it.

They attempted to use this tactic when they first fought the blaze, but they had to give up six hours later in the face of the heat, smoke, structural instability, and apparent lack of progress.

“It was clear at that point that this thing was going to burn,” Oliver told the council.

As well, the worst part of the fire was on the far side of the pile and inaccessible to machinery.

Oliver said a fire of this type is simply unquenchable without using more water than the fire department hoses can provide.

Oliver explained that the fire probably began deep inside the dump’s pile of construction debris — which is mostly wood.

In response to councillors’ questions, Oliver said the fire could have started for any number of reasons, such as the mixing of volatile chemicals, or it may have been sparked by the rapid decomposition of combustible material.

In any event, the fire is not considered suspicious, so there will be no investigation into its cause.

“The thing you have to understand is that the dump is always burning,” Oliver said.

Around 8:00 a.m. on Sept. 24, firefighting operations switched from extinguishment to containment.

At this point, it was critical to prevent the fire from spreading to the nearby, larger pile of household waste.

So, city machines dug a trench between the two piles and soaked the ground beneath with water in the hopes of preventing the fire from traveling underground to the larger pile.

That operation also took three of the city’s four water trucks to constantly ferry water to the landfill, since there are no water pipes there.

During the exhausting, 24-hour operation some Iqaluit residents showed up, bringing food and drinks for the grateful workers, Oliver said.

Fire crews were back on the scene on Sept 28 when high winds out of the northwest threatened to blow hot embers onto the larger pile.

They have been continually soaking the large pile, keeping it wet so the fire doesn’t catch.

“I can’t guarantee that the thing won’t catch fire,” Oliver said. “It’s possible, but not too probable.”

If that happens, Oliver said the fire department will move quickly to douse any flame on the larger pile before it spreads.

Public works is also moving some of the more potentially toxic garbage out of the landfill, such as tires and the cubed and un-cubed scrap vehicles awaiting to be shipped out by sealift out of Iqaluit.

During the council meeting, Oliver also fielded questions regarding concerns for the nearby tank farm, which holds the city’s fuel supplies.

Located 750 metres from the landfill, the tank farm is not really endangered by the dump fire, he said.

Of greater concern is a transfer tank along the pipe from the docking manifold where freighters offload fuel.

That tank is empty unless a freighter is offloading, but there are still residual fuels and fumes – and these are only 300 metres away.

If the big household waste pile ignites, “then we’ll have to see,” Oliver said.