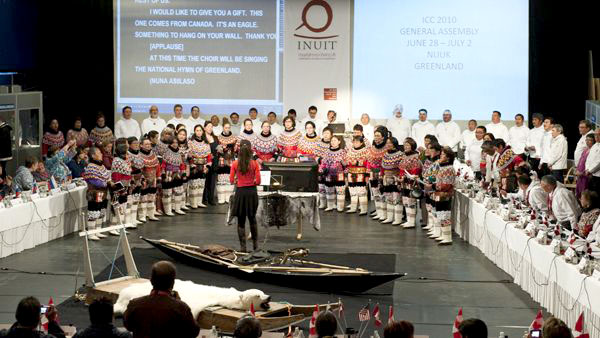 Slamming the federal government for Nunavut’s lack of infrastructure and control over its natural resources, Premier Eva Aariak used her opening remarks June 28 at the Inuit Circumpolar Council assembly in Nuuk to declare that, because of Nunavut’s lack of basic transportation connections, the map of Canada is incomplete.

“Many people are surprised when they learn that Nunavut does not have a single port which connects its 25 communities,” Aariak said at the first morning session of ICC general assembly.

More than 60 Inuit delegates from around the circumpolar world will gather for the next four days at at Nuuk’s Katuaq cultural centre.

The delegates, from Chukotka, Alaska, Canada and Greenland, gave Aariak a standing ovation as she approached the podium to speak.

“There still remains a lot of work to do in the North before we can enjoy a quality of life similar to southern Canadians,” Aariak said.

While lauding the Government of Nunavut’s progress in promoting the Inuktitut language and Inuktitut education, Aariak noted that Nunavut still lacks control over Crown lands, its natural resources and the benefits that flow from development.

“The final say over the lands that Inuit have occupied for centuries still rests with the Government of Canada,” Aariak said, adding that “the message I have been transmitting time and again to the federal government is that Nunavut is ready for devolution.”

Aariak said Nunavummiut are in the best position to decide where and how to use their resources.

Self-determination for Inuit in Nunavut will mean encouraging a new form of self-reliance.

“Signing a devolution agreement and implementing our existing land claim agreement is the key to realizing self-determination in all areas: social, economic and cultural development,” said Aariak, who may have been disappointed that Indian and Northern Affairs Chuck Strahl — invited to the ICC meeting — was not in the audience.

During her speech, Aariak also mentioned that ICC members, who come from Chukotka, Alaska, Canada and Greenland, share a focus on common priorities, such as:

• protecting our environment; and,

• adapting to the impacts of climate change.