“Women are essential to our society as decision makers” 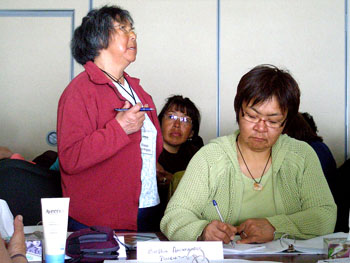 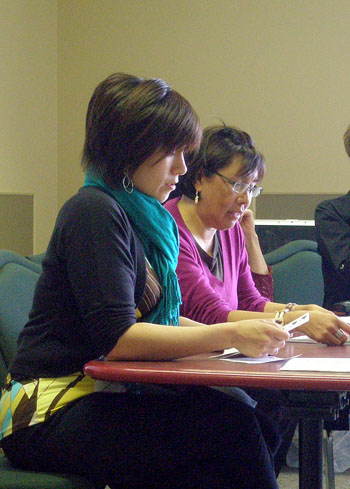 KANGIQSUJUAQ — Until recently, Eva Gunn didn’t give much thought about how being a woman affects her place in society.

But after attending a recent governance training workshop for women in Puvirnituq, Gunn now sees that Nunavik women can bring a lot to their communities and region.

“It was a real eye-opener,” said Gunn, who works as a corporate secretary for the Fédération des cooperatives du Nouveau-Québec in Montreal. “There are other women who want to enhance the quality of life for other women and the population as a whole.

“And women are essential to our society as decision makers,” she added. “We’re team players, we listen and we’re sensitive.”
Female leadership is essential to good governance, said Gunn, who hopes to see more women in Nunavik politics.

Gunn was among more than 40 women who gathered in Puvirnituq May 17 for a week-long workshop organized by the Saturviit Inuit Women’s Association of Nunavik.

Gunn, originally from Umiujaq, said she left the governance workshop feeling like she had a voice.

She also left as a new Saturviit board member, elected to represent Montreal Inuit women.

“There were a lot of strong women at this conference,” Gunn said. “It gave me the confidence to say ‘I can make a difference.”

Lisa Koperqualuk, another Saturviit member and workshop coordinator, says that attitude reflects a positive trend that she sees across the region.

“I certainly get the feeling that women want to participate in leadership (roles) in their communities,” Koperqualuk said. “And it’s evident that they’re doing that.”

In many of Nunavik’s municipalities, there are more women than men sitting on council. In the last municipal elections, nine women ran for mayor’s jobs and 54 for council positions.

“That’s why I think this training was important,” she said.

For example, the Nunavik marine region wildlife board lacks female membership, she said.

“Women were saying ‘Hey, there’s a position open on this board and
we’d like to see a Saturviit member have a place there,’” Koperqualuk said.

In a 2006 survey of Nunavik’s workforce, the Kativik Regional Government found that women held 44 per cent of all regular full-time positions, and more than half of the part-time positions.

The number of full-time jobs held by women grew by 84 per cent over a 10-year period, the same study found, mainly due to the creation of jobs in Nunavik’s childcare centre network.

The training workshop was intended to help them develop management and guidance skills.

“Often as women, we tend to think we don’t have these skills, there’s doubt and lack of confidence,” Koperqualuk said. “So the training session explained what leadership is.”

Other sessions also showed participants how to communicate their ideas.

Koperqualuk said a session on how to debate topics brought some of the workshop’s best energy and enthusiasm to the forefront.

Mary Simon, head of Inuit Tapiriit Kanatami attended as one of event’s speakers as well as Fatima Houda-Pepin, a member of Quebec’s national assembly, and Maggie Emudluk, the chair of the Kativik Regional Government.

Emudluk was invited to attend the workshop to speak about her experiences in municipal and regional politics.

“They’re trying to show different models of leadership,” Emudluk said. “I think the outcome of this will be very interesting, it’s really the first of its kind.”

The workshop was coordinated in part by Quebec’s Centre de developpement femmes et gouvernance (centre for women’s development and governance) and funded by Status of Women Canada and the KRG’s employment and training department.

Saturviit, which re-activated in 2005, now counts 200 members across the region. Membership to Saturviit is open to Inuit women who are beneficiaries, 16 and older.

Associate membership is available for non-beneficiaries, for businesses and for organizations.

Saturviit’s mandate is to give a voice to Inuit women while focusing on positive parenting, education, healing and anti-violence in Nunavik’s homes.

During the event, Saturviit members re-elected Lizzie Tukai to another term as the association’s president.

For more information or to become a member, email saturviit@tamaani.ca 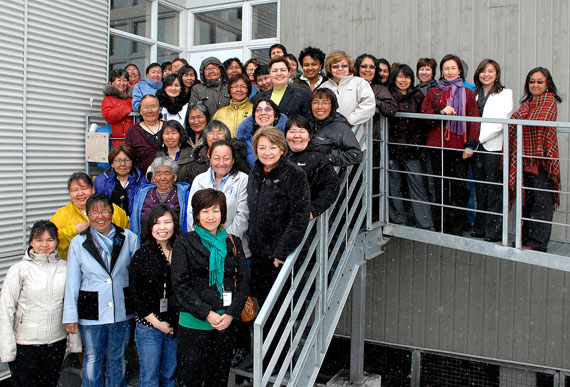