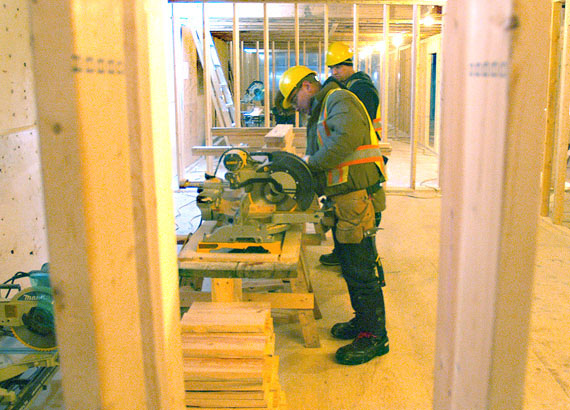 Builders work on a 10-plex social housing unit in Iqaluit in February, 2009. A report by auditing firm Deloitte and Touche found widespread problems at the Nunavut Housing Corporation led to massive cost overruns at the $200-million Nunavut Housing Trust. (PHOTO BY CHRIS WINDEYER)

A review issued by the Government of Nunavut this week found that when the Nunavut Housing Corp. tried to build 725 housing units under the $200 million Nunavut Housing Trust, everything that could go wrong did go wrong.

And the review’s authors, the accounting firm Deloitte and Touches, said the corporation still suffers from ineffective training, too many incompetent staff, and a decentralized structure that prevents the organization from doing its job.

“These inherent risks, if left unaddressed or not adequately mitigated by management, will likely continue to adversely impact NHC its achieving its mandate to provide affordable housing,” said the review’s authors.

Housing minister Tagak Curley said he wasn’t surprised by the contents of the report.

“I think it’s a very helpful piece of advice and they have identified a number of weaknesses which the housing corporation has been addressing,” he said.

The review looks only at the $200-million Nunavut Housing Trust, and does not discuss the $100-million Affordable Housing Initiative, which has produced another $50 million in cost overruns.

Hunter Tootoo, then the housing minister, ordered the review this past May after announcing that the corporation overspent on the Nunavut Housing Trust construction program by about $60 million.

The review found the housing corporation’s ability to do its work is still at risk because:

• the corporation’s staff are limited in number, with too few people holding “the required skills and competencies;”

• the corporation’s decentralized structure, scattered among five communities, “may not be appropriate to enable the achievement of its objectives;”

Curley said in an interview Oct. 8 he’ll undertake a major overhaul of the corporation. He said he’s already ordered seven financial positions, currently located at the corporation’s headquarters in Arviat, be relocated to Iqaluit.

The next step, Curley said, is to look at changes to the corporation’s governance and management. “We’re going to make the Nunavut Housing Corporation certainly more effective,” he said.

The review confirmed that the corporation overspent on the Nunavut Housing Trust by about $61 million.

To achieve that, the housing corporation badly underestimated the actual costs of building each of the approximately 725 housing units constructed under the program.

The corporation originally forecast a per-unit cost of $275,000.

But the review found the corporation actually spent an average of:

As to why the housing corporation’s cost forecasts were so bad, the review’s authors could not provide a complete answer to the question.

That’s because they found little documentation from the period in 2006 when corporation staff prepared their estimates.

Instead, they relied on interviews with housing corporation staff.

“Our review found that the original budget was prepared in isolation by the Directorate Office and documented standards, guidelines, and assumptions for the original NHT budget could not be found,” the review said.

But the review does cite numerous screw-ups that drove costs higher.

• widespread theft or loss of required building materials that affected nearly 100 per cent of units under construction;

• contractors who were short of materials “appropriated” materials from crates and containers intended for other parties;

• screw-ups by housing associations and housing authorities, especially in the Baffin, where many built housing without written contracts;

• material shortages drove up labour costs by as much as 38 per cent in the case of some contracts;

• underestimates in the cost of applying the Article 24 NNI policy, which raised costs by an average of $16,617 per unit;

• inaccurate accounting and project monitoring, which prevented anyone from seeing the cost increases;

• corporation staff did not look at historic construction costs.

But the corporation did save on site work and foundations, so total average overspending amounted to $79,000 per unit.