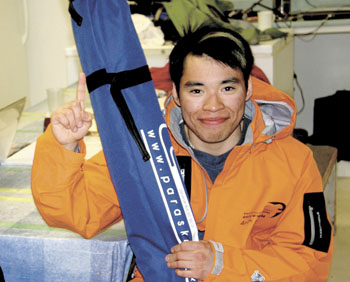 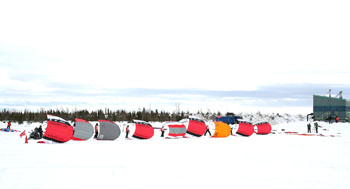 Racers at the starting line of the 3rd edition of the Arctic Wind Riders Championship, held last weekend in Kuujjuaq. (PHOTO COURTESY OF GUY LAFLAMME)

On a grey April afternoon in Kuujjuaq, Stewart Lake is dotted with colour.

From a distance, the bright specks dance across the ice.

A closer look reveals the billowing kites of the eastern Arctic’s most talented paraskiers.

“The conditions were hard for the racers, with light wind and heavy snow,” said Guy Laflamme, Arctic Wind Riders’ program director. “But over the three days, racers had a chance to compete in triangle racers, speed runs and a marathon event.”

For prizes, winners took home new equipment – kites and harnesses that can cost between $700 and $1,000.

Since 2006, the Arctic Wind Riders program has been introduced to twelve communities in Nunavut and Nunavik. Eleven of these communities now have their own trained instructors, Laflamme said whose company has sold paraski equipment to several municipalities across the region.

Each community developed the program differently, he said.

While paraskiing is for anyone who can navigate the ice on skis (or less often, snowboards) the sport seems to be most popular with young male riders in their late teens and early 20s.

In Kuujjuaq, teacher Lucas Brown helps coordinate the local paraski club, coaching six riders. It started as “something fun” to do with his students, he said, and grew into a community program and personal passion.

“It’s so dynamic,” Brown said of the sport. “I think a lot of people like the speed – kids seem to be attracted to that. It’s also flashy and colourful.”

Brown recently took two of his riders to Ste.Placide in southern Quebec for training. Eventually, the young men can get certified to work as instructors in the community, he said.

In Kuujjuaq, where the popularity of paraskiing is slowly growing, Brown said the sport also is good alternative to camping and fishing when there are strong winds.

“Typically, people don’t like to be out in the wind,” Brown said. “But when you start paraskiing, you start to actually look forward to windy days. It’s a great feeling.”