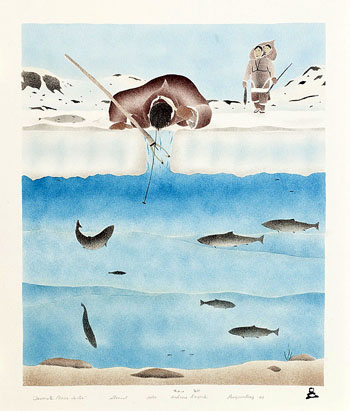 Favourite place to be, 2003, by Andrew Qappik (COURTESY OF THE WAG)

People of Pangnirtung, 2009, by Andrew Qappik, gift of H.G. Jones (COURTESY OF THE WAG) 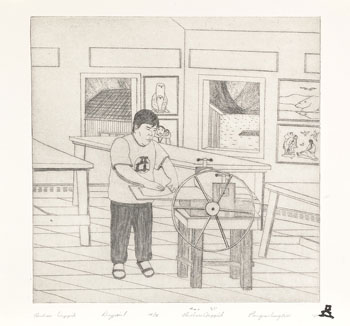 Andrew Qappik (Self-Portrait in Printshop, 2003) by Andrew Qappik, gift of H.G. Jones (COURTESY OF THE WAG)

When Pangirtung artist Andrew Qappik walked into the exhibition hall at the Winnipeg Art Gallery on April 29 and saw 33 of his works on display, he was awed.

The sight of all those prints, engravings and even a recent oil painting brought back “a lot of memories,” Qappik said in an interview from Winnipeg on the exhibition’s opening day.

Qappik said he’d never seen so many of his works gathered in one place including some he hasn’t seen in years.

The Winnipeg exhibition, Qappik’s first solo show, spans 31 years of his life It came together thanks to the remarkable enthusiasm of H.G. Jones, an American historian from North Carolina.

Qappik said he can remember being let out of school to meet this collector who was impressed by four prints he had made for the 1978 Pangnirtung print collection.

Even at 14, Qappik had been drawing for years.

Whenever he got hold of some paper and a pencil, he would do sketches, drawing at home or in class.

Comic books were an early source of inspiration, and, when Qappik saw posters, he would copy them, producing a detailed drawing of a monkey from one poster.

By 16, Qappik had produced 11 prints, and by 2008, 106 catalogued prints, mastering various methods, such as etching, stonecut, lithograph, drypoint, and linocut.

“I was impressed with this earnestness when he was 14 years old, and that is why I decided to acquire a copy of every print that he produced. His technique has improved, but the spirit of his art still evokes his experiences as an Inuk,” Jones said in a recent email.

Qappik’s works often show traditional stories, activities like ice fishing, or scenes like white and black springtime views of the Pangnirtung fiord. Some also focus on everyday life in the community — such as an image of himself at work in the Pang print shop.

“I am not an artist and know very little about art, but I see in Andrew’s work the visual recording of a culture that he witnessed—from nomadic camp life following game, arrival of a radical new culture, and the difficult absorption of the two into the “new Inuit,” said Jones.

“He does not idolize the past, but he sees and deeply appreciates the hardships through which his ancestors struggled.”

Two examples of these are “Our Ancestors Land is Our Land Now,” at the Unikkaarvik Visitor Centre in Iqaluit, and “Achieving a Dream,” commissioned by the Vancouver Organizing Committee for the 2010 Olympic Winter Games.

And he’s carved and painted wooden signs for businesses and government agencies, designed a coin for the Royal Canadian Mint, and for the Government of Nunavut, he designed the territorial coat of arms and the official government logo.

“He’s an artist’s artist,” said Darlene Wight, curator of Inuit art at the Winnipeg Art Gallery, noting Qappik often plays with perspective, using a bird’s eye view looking down, and focuses on details like the splashing water left by the wake of a boat.

“He uses very western techniques of drawing, like three-point perspective, shading to give three-dimensionality to his works. When people think of Inuit works, prints, they think of flat images on the white paper. He puts his images into full landcaapes, which is not typical,” Wight said.

Jones collected a total of 140 works by Qappik over 31 years, which he gave to the Winnipeg art gallery in 2006.

“Because the collection is unique, I wanted it to remain together. And, because Inuit art is little known in the American south, I felt it appropriate to return the collection to Canada,” Jones said.

An agreement with the Council on Canadian-American Relations, an American nonprofit organization that enables U.S. citizens to make gifts to Canadian museums and earn tax benefits, paved the way for the gift.

Since receiving Jones’ gift, the Winnipeg Art Gallery has used Qappik’s works in various shows on different themes, such as games and landscapes.

The gallery also acquried an oil painting called “People of Pangnirtung” which Qappik did after Danny Osborne, an artist now living in Iqaluit, gave a course in oil painting, a medium that was new to him.

Qappik’s exhibition remains on display at the Winnipeg Art Gallery at 300 Memorial Blvd. in Winnipeg until Aug. 1.