Study: More open market could raise costs for some communities 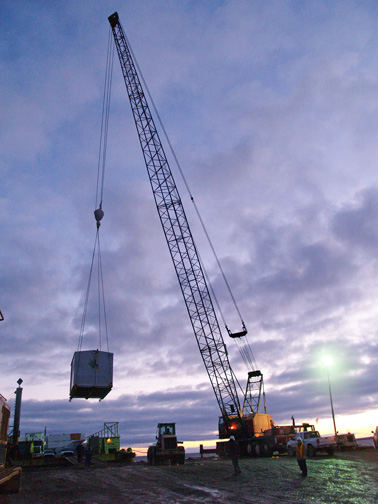 A crane moves a container during the last sealift call in Baker Lake in October, 2007. A new report commissioned by the Government of Nunavut warns that switching to a free market system would save some communities money but cost the territory as a whole more. (FILE PHOTO)

More competition between shipping companies allowed stores in the Kitikmeot region to cut prices, says a Government of Nunavut report on the 2009 sealift season.

Northern Transportation Company Ltd.’s new barge service from Richmond, BC, which started last year, and competition from two other carriers, drove down the cost of shipping to the western Arctic, according to the CGS summary for the 2009 sealift season.

“It was reported that lower shipping costs enabled stores to reduce prices,” says the report, tabled earlier this month in the Legislative Assembly.

But another report commissioned by the department suggests switching to an open-market system for sealift would produce more losers than winners.

“An open market sealift in Nunavut would result in a serious decline in standard of living and in quality of life for a number of communities,” reads the report, prepared by Mariport Group, “while the benefits to others would not materially improve their situation.”

The study, also tabled in the Legislative Assembly by CGS minister Lorne Kusugak, estimates that while North Baffin and High Arctic communities would see their total cost of shipping decrease, the Nunavut-wide impact would be higher costs.

Now, the GN negotiates shipping rates for the entire territory through a request for proposals and has the final say on contract terms and the number of calls each community gets during sealift season.

Under an open-market system, the GN would negotiate rates only for its own cargo. Contractors would work out their own rates with sealift carriers, while carriers could dictate rates for individual consumers.

The Mariport study states that Iqaluit and possibly Rankin Inlet could eventually switch to an open market, but only if those communities receive better marine infrastructure and if a third carrier entered the market.

The report states that Iqaluit, with between 30,000 and 40,000 tons of cargo coming in every year, could see “materially reduce[d] freight costs” if a third carrier entered the market.

But it suggests distance and geography would force higher rates for Igloolik, Hall Beach, Repulse Bay and Sanikiluaq.

Baker Lake, despite heavy cargo demand from the region’s booming mining sector, would also see higher rates and a possible decrease in service, because of the distance and cost of shipping cargo by barge through the Chesterfield Narrows.

And because of huge distances from Montreal, where most Arctic shipping originates, the report warns Resolute Bay and Grise Fiord could see huge spikes in shipping costs.

But the Mariport report echoes the GN’s assessment that the Kitikmeot served as a kind of test for an open market in 2009, with NEAS, NSSI, and NTCL all sailing into the region.