Cape Dorset hunters get their bowhead 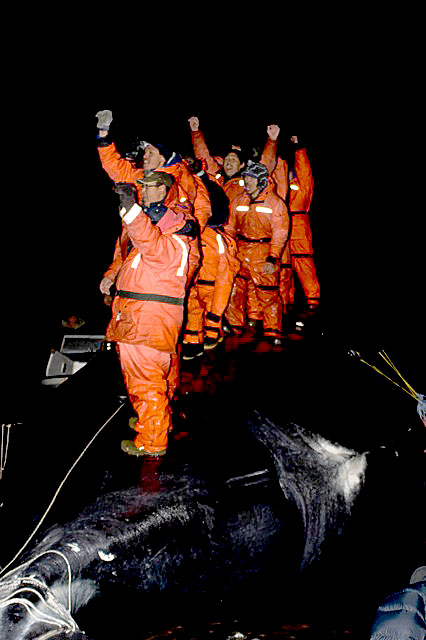 Cape Dorset bowhead whale hunters pose for a picture while standing on the big bowhead whale they landed Sept. 29., about 40 km east of the community. (PHOTO COURTESY OF JOHN CORKETT)

About 500 Cape Dorset residents gathered by the beach in front of Cape Dorset late on the evening of Sept. 29 to watch hunters bring in the community’s first legal bowhead whale in more than 100 years.

The hunt crew, led by captain Qimmiataq Nungutsuituq, killed the whale around 3:00 p.m., only 45 minutes after sighting it about 40 km east of Cape Dorset.

But it took the crew between seven and eight hours to tow the whale back to their community.

A Cape Dorset resident told Nunatsiaq News the whale was “well over 50 feet” in length and that the hamlets’ two large front-end loaders, a wheel dozer, and a Cat D7H couldn’t pull the dead animal past the high-tide mark, since the lines they used kept on snapping.

Crew member Egeevadluk Suvigak is credited with the catch because it was he who first wounded the animal.

The lead harpooner was Daniel Taukie, who handled the penthrite grenade device.

The legal hunt period had been extended for one week because of bad weather over the past two weeks that caused the Cape Dorset hunt to be repeatedly called off.