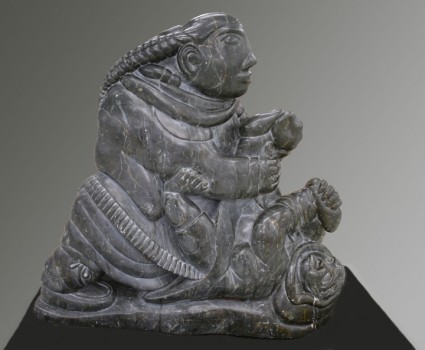 This giant carving by Lucassie Echalook (Iqaluk) of Inukjuak, which weighs several hundred pounds, was donated to Avataq by the man who bought it to ensure it would remain part of the cultural heritage of Nunavik. (PHOTO COURTESY OF AVATAQ) 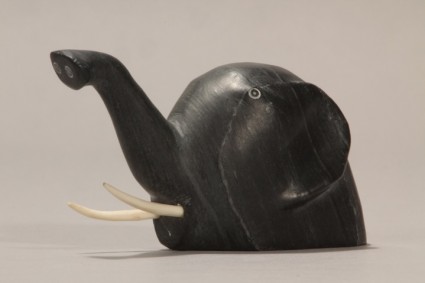 This elephant is among the unusual carvings in the collection of Nunavik’s Avataq Cultural Institute. (PHOTO COURTESY OF AVATAQ) 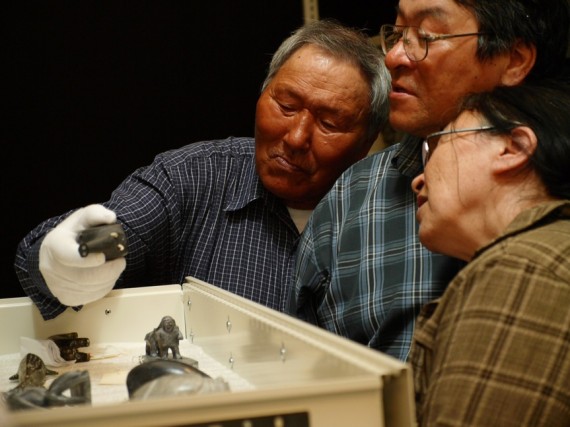 Isaacie Padlayat of Salluit, a board member for the Avataq Cultural Institute, views a soapstone elephant with Zebedee Nungak, director of Avataq’s Inuktitut language department and board member Jeannie Nungak of Kangirsuk. (PHOTO BY ERIC FERLAND, COURTESY OF AVATAQ)

MONTREAL — Much of Nunavik’s rich historical legacy is cocooned within a sturdy brick building on Peel Street in downtown Montreal, where it’s kept safe for future generations.

No one would imagine that amautiit worn by Nunavik women, seal-hunting harpoons, carvings and thousands of photos are locked away in this storage facility behind a series of airtight entrances protected by a guard and security cameras.

These artifacts, works of art and archives from or about Nunavik lie safely in drawers and on shelves where the temperature stays at 20.5C and the humidity level never rises above 50 per cent.

But that’s the idea — to safeguard these priceless items in a controlled, secure environment, staff with Nunavik’s Avataq Cultural Institute say.

Avataq now runs the new facility. Until earlier this year, Avataq’s art collection was stored in bundles and boxes at the Canadian Conservation Institute near Ottawa.

The new storage facility has an indoor garage, which means these precious objects are never exposed to sunlight when they are moved in or out of the building, which also houses other Quebec museum collections.

Until recently Avataq curators weren’t even sure what the collection included.

But since April, Avataq staff members, assisted by students from a Quebec college museum program, managed to unpack countless archeological materials, photos, papers, artifacts and art works and arrange them in custom-designed shelves and drawers.

Most items were photographed and the images put into a digital data base.

There you can view 360-degree images of many items, such as this polar bear carving. http://avataq.qc.ca/en/node_66/Art-and-ethnography/Sculptures/detail/?id=208)

And, while it may seen odd to keep these precious bits of the Nunavik’s past in Montreal, a secure, climate-controlled facility like this one would be too expensive to build and maintain in the North, Avataq curator Louis Gagnon said.

But Avataq’s intent isn’t to bring materials down from the North unless they need special conservation, he said. Avataq simply wants to preserve its existing collection in a safe place.

From there, items can travel to institutions for exhibition, researchers can come in to consult materials, and — above all — Avataq’s collection will remain in good condition for many generations, he said.

“We don’t want to repatriate more items to the South— just the opposite,” said Gagnon, who hopes Avataq’s collection may some day be displayed in museum exhibitions in Nunavik , perhaps at the multi-purpose museum facility that people in Puvirnituq want to build.

Avataq’s art collection now contains about 1,400 works of art and other cultural objects, handed back to Avataq from the Department of Indian and Northern Affairs in the 1980s and then put into storage.

This collection includes sculptures produced between 1950 and 1980, stone-cut prints and other works on paper from the 1960s and 1970s, utilitarian objects from 1960 to 1975, and some reproductions of traditional objects.

Avataq’s archaeology collection incorporates nearly all the artifacts that its department of archaeology has collected since 1985, as well as other collections from Nunavik. It also includes photographic archives, maps, and all the documents connected to the institute’s archaeological research.

All Makivik Corp.’s original photos and recordings from CBC North are also part of the collection.

The design and purchase of the equipment needed to store these materials cost about $700,000, money that came mostly from Quebec. Quebec, along with Avataq, Makivik and Heritage Canada, also helps pay for the space’s rental and upkeep.

But the spending is worth it, Gagnon said, because Avataq’s collection includes many irreplaceable items, such as the massive carving by Inukjuak carver Lucassie Echalook.

Iqaluk carved the 300-pound figure — which shows a woman with twin babies in her amautik helping a child remove his kamiiks — for the coming of the new millennium in 2000.

On the bottom of the carving, an inscription reads “« I am Lucassie Echalook from Inukjuak. I am fine. I was born in the year of 1942, today is the year 2000. Thank you for I am alive… »

His giant-size carving was bought by a non-Inuit resident who later gave it to Avataq, knowing the carving would never be sold.

“We can’t sell it. It is in trust for Nunavik for all Nunavimmiut,” Gagnon said.

Several years ago, the late Carmen Longchamps, who worked for years as a nurse in Ivujivik and Kuujjuaraapik, also donated several unique pieces by Ivujivik artist Matiusi Iyaituk when she knew she was dying of cancer.

Avataq hopes to receive more donations to build up its collection.

Although Avataq’s storage facility hasn’t been open long, some groups from Nunavik have already visited.

Avataq’s collection is open to all Nunavimmiut, and anyone interested in visiting the facility should contact Avataq first (http://avataq.qc.ca) to make an appointment.