“I was always asked, ‘do you know what you’re getting yourself into?'” 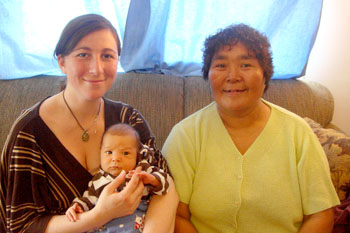 Unlike most other young children in the community, Pond Inlet’s newest resident, Jaide Inuaraq, came into the world with the help of two traditional midwives.

Jaide, nearly a month old, is the son of Jen and Niko Inuaraq. He was born inside his family’s home Sept. 8 with the help of midwives Ragilee Ootoova and G. Sangoya.

Jen Inuaraq, 28, said she was determined to give birth to her first child in Pond Inlet, despite discouragement from local health workers.

“I’ve always liked the idea of staying home [to give birth],” said Inuaraq, who admitted to having a phobia about hospitals and medical intervention in general.

Nurses and doctors at the community nursing station were not pleased with her decision, Inuaraq said.

“I would go for my check-ups and I was always asked do you know what you’re getting yourself into? And this can happen and that can happen. It was almost like they were trying to scare me into going. They did not want me stay here,” Inuaraq said.

Before Inuaraq gave birth, health authorities asked her to sign a statement in which she officially acknowledged her personal responsibility for deciding to give birth in Pond Inlet, instead of Iqaluit.

A home birth isn’t for everyone, she acknowledges.

But during her pregnancy, Inuaraq had no complications. Her baby was well-positioned. She didn’t drink or smoke and she also ate well — all important factors for a healthy baby,

As well, Inuaraq had a supportive husband and mother-in-law who can remember when Inuit always gave birth at home in the community.

Inuaraq’s mother, a nurse, also accepted the decision, saying “as long as you feel fine and don’t have any problems,” it’s okay.

The decision to remain in Pond Inlet was also made easier because Inuaraq is a non-Inuk resident of Nunavut.

Inuaraq discovered that, because of her ethnicity, she would be responsible for finding and paying for her own lodging while waiting to deliver at the Qikiqtani Regional Hospital in Iqaluit.

As it turned out, the birth went well. Inuaraq’s labour started early in the morning, and by 11:30 p.m., she gave birth to seven-and-a-half-pound Jaide.

Shortly after the birth, Inuaraq went to the local nursing station where a nurse stitched up the minimal damage that occurred during the birth.

Three weeks after her unmedicated birth, Inuaraq said she feels in excellent shape.

“I definitely think it’s a very positive experience. There’s nothing like being in your own home,” she said.

In the Baffin region, pregnant women, who receive prenatal care from nurses, are normally flown out at 36 weeks gestation to Iqaluit or Ottawa.

There they wait until labour starts, and they often deliver alone without family support. Three days later, they fly home with their baby.

Nunavut has some registered midwives, but the midwives closest to Inuaraq work out of the Rankin Inlet birthing centre.

As for traditional midwives, they practice in a grey zone.

Nunavut’s law on midwifery came into effect last September, but it contains no definition of traditional midwifery is, and no clear-cut “grand-mothering” clause that would allow traditional Inuit midwives to practice as registered midwives in Nunavut.

The law only calls for traditional midwifery practices to be included in midwifery training programs.

Nunavut Tunngavik criticized the law, before it received assent, saying it would prevent a woman from deciding whether she wants to give birth with a doctor, a midwife or a traditional Inuit midwife.