“We understand that you cannot just forget the pain.” 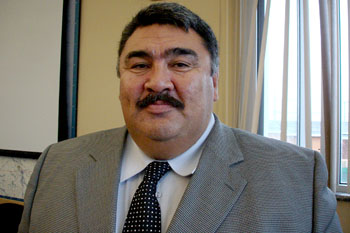 Quaqtaq mayor Johnny Oovaut is organizing a men’s conference, which will take place in his community from Oct. 8 to Oct. 12. (FILE PHOTO)

Nunavik men who want to change their lives should come to Quaqtaq over the long Thanksgiving weekend, says Johnny Oovaut, the mayor of Quaqtaq.

That’s when the community’s fifth conference for men is to take place.

Nunavik men need to learn better communication skills and how to foster closer relationships with their spouses and children, Oovaut said.

And previous conferences have given the men renewed hope that they can change for the better, he said.

Scheduled speakers at the conference include Andy Koornstra, a fundamentalist missionary connected with Arctic Missions.

Koornsta wrote a book called “Homosexuality — Getting Free, Staying Free” about his determination to change from homosexual to heterosexual behavior through religious means.

The men’s conference is a non-denominational, “faith-based” event, open to all men in Nunavik, Oovaut said.

The activities, which include talks and individual counseling, will take place in English and Inuttitut.

During the conference, Oovaut said he hopes men will open up and face issues connected to shame, guilt and grief.

“We understand that you cannot just forget the pain,” he said. “Some things happened a long time ago or happened to you and you’re ashamed. You don’t advance, and it controls [you]. So we try to help men overcome that.”

Men tend to hold their emotions in check unless they come out violently — often under the encouragement of alcohol or drugs, he said.

“We’re destroying ourselves. We can help people to understand that they don’t have to live like that,” he said.

“That’s what I am trying to do. We have the means and the ability to recover to get back on our feet, not to hate the white man anymore, not to be so bitter.

“Today, we don’t have to be like that. We live in warm houses and we’re not starving. We do all kinds of fun things these days, but we are blinded by the bitterness. We don’t realize we have these blessings.”

Air Inuit is offering a discount to men who want to travel from other communities to attend the conference.