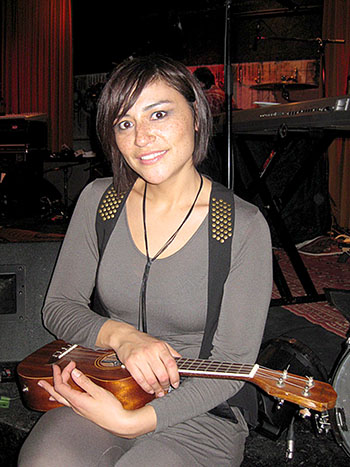 Elisapie Isaac of Salluit scored a major success in her appearance at Toronto’s Drake Hotel earlier this month. (PHOTO BY JOHN BIRD)

Isaac combined her breathy, ethereal voice — the aural equivalent of a snow goose floating over the summer tundra — a winning, vulnerable smile, and the light, French-café arrangements of her poppy tunes, to weave a spell that had the hip Toronto crowd eating out of her hand.

“I believe somehow that what I do creates a bit of a feeling of magic for the audience,” the sultry Inuk singer said in an interview before the show, which marked the Toronto launch of her album, There Will Be Stars.

The CD, her first solo effort after writing and performing with musical partner Alain Auger in the duo Taima, has been out since last September.

But Isaac said that to date, she has mainly been promoting it in Quebec.

Now Isaac, who has called Montreal home for a decade, is taking her new creation out into broader pastures.

The Toronto gig was to be followed by one in Guelph, Ont., and two performances at the Vancouver Olympics. Then comes a brief stint in Quebec, including the festival, Montréal en Lumière, before she heads off to France.

“I want my music to help people dream,” she said.

Born in Salluit to an Inuk mother and Newfoundland father, who seems to have bequeathed her a face sprinkled with charming freckles, Isaac, now 32, was raised by an older Inuit couple, after a customary adoption.

Her first musical influences were the Inuktitut hymns she sang with her mother in the community’s Anglican church, she says in the liner notes to There Will Be Stars.

Then she discovered Abba and “life became so much more fun.”

After her uncle Irsutuq Kakayuk heard her sing at 14, he invited her to join him in the renowned Salluit Band. And her musical career began.

It hasn’t been a straight line, of course. After high school, Isaac went south to Montreal to study communications, and then tried her hand at film making, producing a documentary with the National Film Board, If The Weather Permits, a personal reflection on the changing culture of Nunavik.

In 2000, she met Québecois musician Alain Auger, and soon formed Taima with him. The duo released its first and only album, of the same name, in 2003.

It has taken her a few years to get this second album — her first solo effort — out into the world. “I wasn’t used to writing songs alone. I always worked with Alain as a collaborator,” Isaac said.

She feels these songs are a more intimate exploration from her heart. “I’m someone who is always raising questions about how we live, about why we are in this world.”

Isaac hesitated to call it spiritual. She feels more like a musical anthropologist, she said, always trying to understand culture and identity.

“The next solo album will be even closer to me,” Isaac added with confidence. “And it won’t take five years this time because I already have new songs I’m working on.”

“Taking the reins felt good,” she said. “It felt good to push myself, to go through the hesitation.”

When asked what drew her to music in the first place, Isaac answered simply: “loneliness.” She was drawn to the sad folk songs in her teen years, she said.

“I was a bit of a loner. I liked doing things on my own. And that helps if you want to be a musician. You learn to live with your own thoughts.”

She received a promotional CD by the Canadian alt-country band Cowboy Junkies while hosting a show for teens on the Salluit radio station.

She was very taken with singer Margo Timmins’ ethereal voice, and the reflective tone of the music. The band’s music became a major influence.

Speaking from the stage at The Drake, Isaac added that she also loves Leonard Cohen’s writing and singing.

And while Isaac’s music and sound is clearly unique, echoes of both these Canadian icons were obvious in her own work that night at the Drake.

As was the north. There is a sense of space and timelessness in her songs that echoes the broad, uncrowded vistas of the Arctic.

And fortunately, she said with a laugh, she has become a little less melancholy with age, so that although there is still a full measure of heartbroken grieving in her songs, Isaac has been surprised to find moments of real joy breaking through here and there as well.

Nunavik and the North are still important in her life, even though she now calls Montreal home.

She was back there in July, with her four-year-old daughter. And motherhood has made her relationship with her family even stronger, so that she anticipates many more trips back home.

She is also looking forward to the opportunity to perform again across Nunavik and Nunavut. Some say, the sooner, the better.