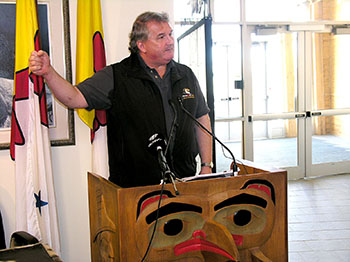 Piers McDonald, the former Yukon premier who led the team that produced the Qanukkanniq report card on the Government of Nunavut, released at 9:00 a.m., Oct 1, said Nunavut represents a “compelling ideal” and that there is much hope for the future. (PHOTO BY JIM BELL)

A sweeping report on the quality of relations between the people of Nunavut and their territorial government recommends big changes in how the Government of Nunavut does its work.

North Sky Consulting, a group led by Piers McDonald, a former premier of Yukon, unveiled the Qanukkanniq report card on the Government of Nunavut Oct. 1

Like almost everyone else who works at the Nunavut legislature in Iqaluit, just about the first thing Premier Eva Aariak did this morning was run upstairs to read it.

That’s because everyone, Nunavut government officials included, got to see the document at the same time.

“When I first saw Piers this morning he asked me how I was and I said ‘anxious,’” Aariak joked when McDonald handed the report material to her.

Aariak ordered the report card earlier this year in the face of widespread dissatisfaction with the quality of government offered by the GN.

She said she wanted the consulting team to find out what works, what needs improvement and what isn’t working at all.

On receiving the report, Aariak thanked the 2,106 Nunavut residents who shared their views with North Sky’s researchers.

“You have clearly outlined the issues that are most important to you and shown that you care deeply about finding solutions,” Aariak said.

She said the full caucus of MLAs will meet later this month to complete their action plan, in response to the report card.

“Now that we have heard from you, we look forward to moving forward with your mandate,” Aariak said.

Much of what the consultants found is not flattering.

“Without doubt, the expectations most people had of Nunavut at its inception have not yet been met,” they wrote in their report.

McDonald said his team recommends that the GN’s first priority should be improved communications.

“More than anything else, Nunavummiut said that communication with their government is very poor… When they think they know who to phone, nobody answers,” the North Sky report says.

He also said communication between units of government needs much improvement.

“Communications within and between departments is woefully inadequate; some staff found out about important government or even department initiatives through the media,” the report says.

At the same time, co-operation between departments is “inadequate and, in some instances, entirely absent.”

He said all this, combined with poor financial management systems and reporting procedures, makes it impossible for the GN to provide good service to Nunavut residents.

The report also found senior managers don’t stay in their jobs long enough to follow through on major, long-term projects.

To that end, consultants recommended that top managers should be kept in their jobs for longer periods.

And to deal with the absence of communication between departments, the consultants recommended the GN create a priorities implementation committee make sure that priority work gets done.

As for staffing, the consultants found there are numerous employees who are not qualified for their jobs and who are not getting proper training.

“Some GN staff expressed concerns that non-Inuit people dominated the managerial ranks. Others stated that too many individuals, including those hired to fill Article 23 ‘Inuit quotas,’ were underskilled and left to fend for themselves without proper training or job orientation,” the report says.

Another big GN scheme, decentralization, got a thorough pasting in the North Sky report.

The consultants said many people told them the decentralization of government jobs to communities outside the capital is “expensive and wasteful,” and that the assumed benefits never materialized.

That’s because people in the communities says few local people are qualified for decentralized jobs and there has been little economic stimulus.

At the same time, under-housed permanent residents of many communities resent outsiders who take government jobs and the staff housing that goes with them.

And within the government, many GN employees say decentralization has made decision-making more convoluted and that some decentralized offices have never been properly integrated into their departments.

To fix this, the consultants recommend a review of decentralization “to determine what can be salvaged.”

The consulting team’s recommendations include the following:

• the GN must improve communications within the government and with the public;

• support senior management to improve stability and so longer-term projects can be completed;

• more collaboration between government departments, through a priorities implementation committee;

• the GN do an operational review of decentralization to see what can be salvaged from it.

And in response to widespread concerns about social conditions, the consultants recommend the GN immediately fund a program to provide snacks and nutritious food for children and the development of a poverty reduction strategy.

As part of that, they also recommend a major review of of the income support program.

Read the Qanukkanniq material for yourself: