“The population, having increased substantially over the last three decades, is now at the point of decline” 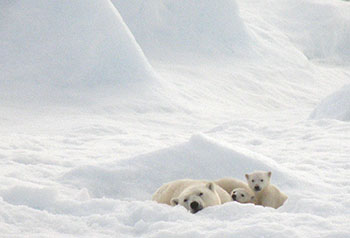 A GN survey finds that the Davis Strait polar bear population, estimated at 2,142, is healthy right now but warns that this number could decline in the future. (FILE PHOTO)

The Davis Strait polar bear population is more numerous than originally thought, a recent Government of Nunavut survey reveals, but may just be the boom before the bust.

The survey report, led by Government of Nunavut biologist Elizabeth Peacock, says that the bear population in the area will drop even if the quota remains the same.

The Nunavut Wildlife Management Board received the report at its recent meeting in Iqaluit.

The NWMB now plans to call a public hearing on a possible change to Nunavut’s annual polar bear quota of 46 in the Davis Strait.

There are 2,142 polar bears in the Davis Strait population, according to GN’s three-year survey, carried out between 2005 and 2007.

“The DS polar bear subpopulation is currently abundant and healthy,” says a background document from the GN that was tabled with the NWMB.

The survey report’s findings confirm what Inuit hunters have said for a long time: polar bears along the southeast coast of Baffin Island, in northern Nunavik, and the northern coast of Labrador, are growing in number.

Inuit hunters had already revised the Davis Strait population estimates 10 years ago from 850 to 1,400, then up to 1,650 in 2004, based on the number of polar bears they encountered on the land.

The numbers of polar bears have increased due to a population explosion among harp seals and the relatively low harvest rate of about 60 bears a year, the survey report says.

Although polar bear numbers in the Davis Strait have increased, the report’s authors also predict these numbers will decline — even without more hunting.

That’s because survival rates are down at the same time as the harp seal population is decreasing and sea ice cover shrinks.

The survey was carried out “just after a peak in population numbers,” suggests a background document tabled at the NWMB.

While Peacock, who has recently left the GN for a new job in Alaska, says in the report that “it is unknown if this decline will continue,” she still concludes that the Davis Strait polar bear population will drop.

“We conclude that the population, having increased substantially over the last three decades is now at the point of decline,” says the survey report.

If the quota remains the same, the number of polar bears in the Davis Strait will reach 1,650, the current target figure for the population, in 2012, but then it will decline to 1,400 in 2016, says the report.

To estimate population size, annual survival and population growth, biologists relied on analysis of their population data from 1974 to 2007 and the results of the mark-recapture-recovery survey from 2005 to 2007.

The survey saw about 800 polar bears marked and recaptured every year over this three-year period.

Every polar bear observed was captured, “providing capture was safe for bears and crew,” says the survey report.

The polar bears were “immobilized” with tranquilizer darts, given a capture number on an ear tag and lip tattoo and measured. A premolar tooth was also pulled to help aging of the animals.

A public opinion poll, conducted by the GN researcher Moshi Kotierk, also looked at 130 Nunavut households, finding that most hunters feel there are “many polar bears” in the Davis Strait and more than they would prefer.

As it stands now, the Nunavut communities of Pangnirtung, Iqaluit and Kimmirut share 46 tags annually.

Nunavik hunters hunt as many Davis Strait bears as they want, averaging a take of about 12 over the past five years.

Greenland has a quota of two, but didn’t take any polar bears at all from the Davis Strait between 2005 and 2007.

There is little sport hunting in the Davis Strait, and no polar bears were killed by non-Inuit hunters in 2008-09.

Officials from Canada and Greenland plan to sign a memorandum of understanding on management of their shared polar bear stocks at a ceremony now scheduled for the end of the month in Nuuk.