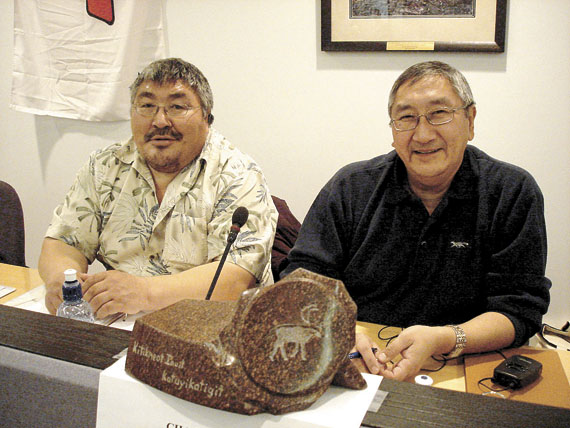 Charlie Evalik (right) said the Kitikmeot Inuit Association’s board has asked for the resignation
of their vice-president, Raymond Kayasark (left), who was charged with sexual assault
related to an incident alleged to have occurred March 28 in Kugaaruk. (FILE PHOTO)

Raymond Kayasark, vice-president of the Kitikmeot Inuit Association, has resigned his position and will be replaced in an election within next few months, KIA president Charlie Evalik said this week.

Kayasark, 56, of Kugaaruk faces a charge of sexual assault in connection with an incident that police say occurred March 18 in Kugaaruk.

“It is with regret I accept Mr. Raymond Kaysark’s resignation and I have enjoyed working with him in the capacity as the Vice President of KIA, there is no doubt his presence and deliberations will be missed, I thank Mr. Kayasark for his contribution to KIA and Kitikmeot Inuit,” Evalik said in a news release.

In a May 25 interview, Evalik said the KIA board felt they had no choice but to ask for Karasark’s resignation when they discussed the matter at their April board meeting.

For summary and indictable charges, resignations are not automatically required, according to the KIA Code of Conduct.

“Board members are expected to obey federal and territorial laws and municipal by- laws. A board member convicted of an indictable offence while servicing his or her term shall be removed from the board.”

But the KIA board decided not to wait for the charge against Kayasark to make its way through the courts.

“I have to follow the KIA’s bylaws and policies and procedures,” Evalik said.

Evalik said a by-election is possible because more than a year remains on Kayasark’s three-year term.

(Comments are disabled on this article for legal reasons.)