Promised steering committee yet to be created 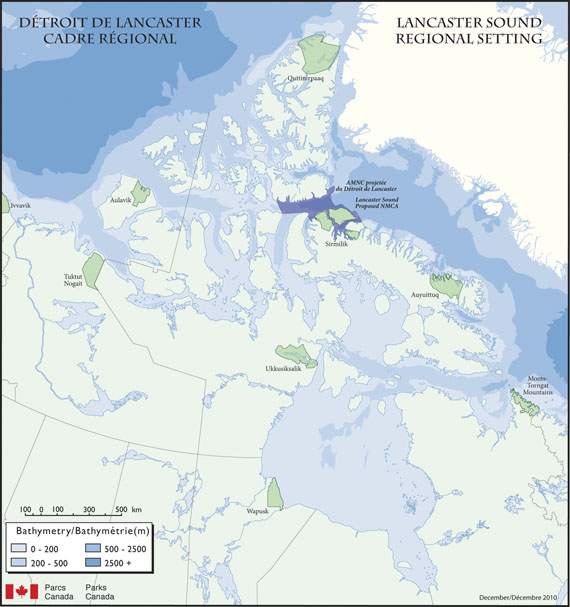 Ottawa has proposed that about 44,500 square kilometres of marine territory in Lancaster Sound become a protected area. But the federal government must still negotiate an Inuit impact and benefits agreement with the Qikiqtani Inuit Association and create a long-promised steering committee that would produce a feasibility study on the park. (PARKS CANADA HANDOUT MAP)

John Baird, the federal environment minister, on Dec. 6 laid out the federal government’s position on boundaries for a proposed national marine conservation area around Lancaster Sound.

Ottawa’s boundary proposal would protect about 44,500 square kilometres of marine territory that encompasses most of Lancaster Sound and all the waters surround Bylot Island, including Eclipse Sound.

It’s part of a negotiation process in which the Qikiqtani Inuit Association and the federal government would enter into talks about how and when a national marine conservation area will be created in Lancaster Sound.

But the completion date for the project still appears to be several years away: a steering committee that would produce a feasibility study on such a protected area has yet to be created.

“I welcome the honourable minister’s announcement as an indication that all parties are committed to advancing on the feasibility study. Beyond boundary proposals, QIA is eager to establish the project steering committee and complete discussions on how the feasibility process will unfold,” Okalik Eegeesiak, the president of Qikiqtani Inuit Association said in a statement issued Dec. 6.

She also said QIA “is setting its sights on a longer term vision for Lancaster Sound,” through the Inuit impact and benefits agreement that must be negotiated before the conservation area can be created.

“The challenge remains to create contexts and processes which permit Inuit to effectively and confidently participate based on respect for their in depth knowledge and use of the land, waters and resources of the region,” Eegeesiak said.

About a year ago, QIA, the Government of Nunavut and Parks Canada signed a memorandum of understanding under which Ottawa would spend about $5 million to pay for the feasibility study.

But since then, Nunavut residents have seen little movement on that file.

The proposed marine park would include areas that were once coveted by the energy industry, including an undersea reservoir called the “Dundas structure,” which is believed to hold at least four billion barrels of recoverable crude oil.

In 1985, a joint venture firm called Consolidex Magnorth Oakwood proposed exploratory drilling of that structure from a drill ship located about 65 kilometres southeast of Dundas Harbour.

But following loud objections from the Baffin Regional Inuit Association and others, the company abandoned its plan.

To allay those kinds of fears, Christian Paradis, the natural resources minister, said Dec. 6 that no exploration or development of petroleum will take place within the proposed boundaries while negotiations take place.

Although the North Baffin land use plan does not explicitly prohibit oil drilling in Lancaster Sound, no drilling has ever taken place there.

Earlier this year, a research proposal by Natural Resources Canada that would have seen a German scientific vessel, the RV Polarstern, conduct seismic testing in part of Lancaster Sound for about two days was shot down in court.

In a decision issued Aug. 8, Justice Sue Cooper of the Nunavut court imposed a temporary injunction on the project, following a storm of protest led by QIA and Oceans North Canada, a conservation group.

This week, Chris Debicki of Oceans North said in a statement that his organization is “very pleased” with the release of the federal government’s boundary proposal.

Debicki also said he’s happy that Baird “confirmed” that no new seismic testing will take place in Lancaster Sound and that existing data will be used to plan for the proposed marine park.

Leona Aglukkaq, the MP for Nunavut, said the next big step in the process is to consult with Inuit organizations, the affected communities and others, as well as to set up the steering committee, which she said is “critical to ensuring that northern interests are considered.”