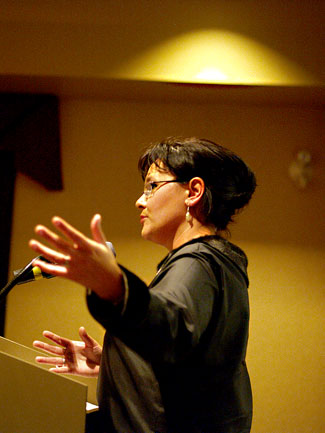 Nunavut MP Leona Aglukkaq speaks to the Arctic sovereignty and infrastructure conference in Iqaluit Oct. 13. Aglukkaq and Pierre Poilievre both warned that the end of the federal stimulus program will make it more difficult for Nunavut to fund infrastructure projects. (PHOTO BY CHRIS WINDEYER)

Nunavut will have to decide what priorities it wants the federal government to fund, because the free-spending days of Ottawa’s stimulus package are coming to an end, Nunavut MP Leona Aglukkaq warned Oct. 13.

The federal government is turning its attention to tackling a $55.6-billion deficit and is determined to turn it into a $2.6-billion surplus by 2015.

That means a cash-strapped Nunavut government will have to decide what needs it really wants Ottawa to fund, because money won’t be available for everything, Aglukkaq told a conference on Arctic sovereignty and infrastructure in Iqaluit.

“It will help if we can agree on shared priorities for Nunavut rather than expect everything to happen all at once and competing with each other,” said Aglukkaq, who is also the federal health minister.

The federal government has flatly ruled out raising taxes to cover its budget shortfall and will instead focus on reigning in spending.

But Pierre Poilievre, the parliamentary secretary to Prime Minister Stephen Harper, said that only means controlling the rate of spending growth, which ballooned during the two-year, $62-billion stimulus package.

“Our government does not plan cutbacks to services or to transfers for healthcare, education and citizens,” he told reporters Oct. 14.

Iqaluit Mayor Elisapee Sheutiapik, who has been pushing the capital’s need for expensive new infrastructure, including a recreation complex, new city hall and fire station, said she’s not concerned that federal belt-tightening will interfere with Nunavut communities trying to secure funding for infrastructure.

“If we want to get things done, [we won’t] necessarily rely on government partnerships but also private partnerships,” she said.

Sheutiapik added the city may be able to access federal money through a $1.2-billion fund set up to encourage public-private partnerships on infrastructure projects.

In what had the ring of an election-style speech, Aglukkaq took a veiled shot at the opposition parties, claiming the alternative to the Conservative government was higher taxes and slower job growth.

However Aglukkaq, unlike Finance Minister Jim Flaherty, did not mention Liberal leader Michael Ignatieff by name.

Flaherty drew criticism last month for an aggressive speech to the Canadian Club in Ottawa in which he claimed a “Michael Ignatieff-NDP-Bloc Québécois coalition” would destroy the Canadian economy.

Instead, both Aglukkaq and Poilievre rattled off a list of federal initiatives in the North, including the creation of the Canadian Northern Development Agency and several infrastructure projects.

And both said Ottawa’s steps to cut red tape in the mining sector will help grow Nunavut’s economy.

“We’re cutting back on duplicative regulations to unleash the enormous power of enterprise and hard work,” Poilievre said in his speech to the conference.

Poilievre also took part in what’s become a rite of passage for Conservative politicians visiting Nunavut: trying country food. Sheutiapik grabbed an ulu and carved him a piece of maktaaq.