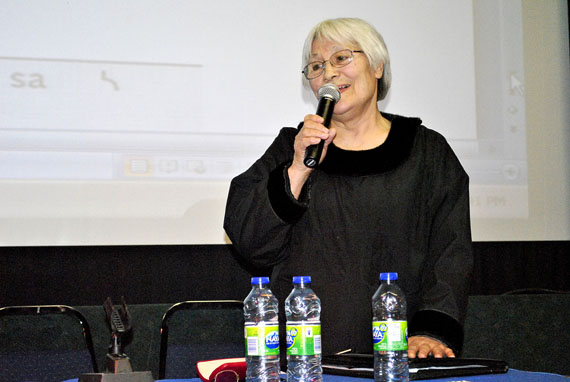 Miriam Aglukkaq, the well-known educator and language activist from Gjoa Haven, speaking at a workshop session held in Iqaluit Feb. 10, said the Nattilingmiut dialect of the eastern Kitikmeot contains unique consonant sounds that are not accurately represented in the dual-orthography syllabic system developed in the 1970s. (PHOTO BY JIM BELL)

Miriam Aglukkaq, the well-known Nattilingmiut educator and language activist, moves her finger along the dense rows of syllabic text printed on the document in front of her, a copy of which is projected above her head on a big movie screen.

The big problem for her region, she says, is that the current dual-orthography writing system taught in Nunavut schools makes no provision for certain unique sounds that exist only in her dialect, which is spoken mostly by people living in Gjoa Haven, Kugaaruk and Taloyoak.

“Because of this, is very difficult to educate the students,” Aglukkaq said. “They mispronounce many words.”

Aglukkaq took part in a big discussion session held Feb. 10 inside Iqaluit’s Astro theatre to talk about issues related to one of Nunavut’s most difficult linguistic issues: the standardization of the Inuit language.

The session was part of a week-long Inuit language standardization conference that attracted participants from Nunavut, Nunavik, Nunatsiavut and Greenland.

Aglukkaq pointed out that the dual orthography system, launched in the 1970s as an attempt to create a standard Inuit language writing system, actually makes it more difficult to teach the Inuit language in her region.

“Many people did not know the words would be mispronounced,” she said.

To correct that situation, Aglukkaq devised a revised syllabary that contains special rows of characters representing sounds found only among Nattilik speakers.

One for example, represents a kind of nasalized “r” sound found in words like “irgak” and the last syllable of “ikajurumaruq.”

To represent that sound, she’s devised a syllabic character based on a modified version of “ji, ju, ja,” by placing a bar through the short tail of the “ji” character.

In the Roman version her orthography, she adds an upwardly curved diacritical mark to the letter “r.”

Another modification is intended to represent a consonant sound reproduced as “shri, shru, shra” in the Roman alphabet.

To do that, she adds an extra tail to the “si, su, sa” row of characters.

Aglukkaq provided workshop participants with examples of written materials that use her revised syllabic system, and a big glossy poster produced with the help of the Hadlari Consulting firm in Cambridge Bay.

“We just need assistance and support for our language,” Aglukkaq said. 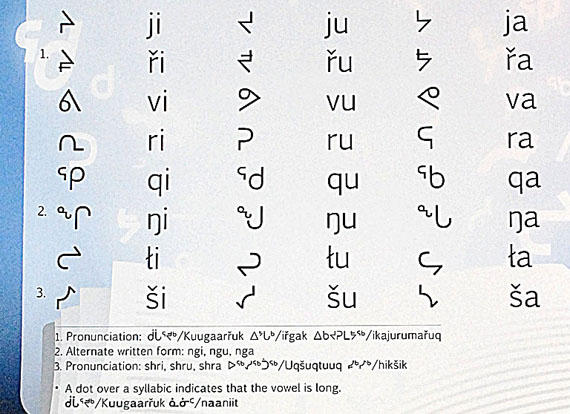 Here’s a section of the revised syllabary that Miriam Aglukkaq uses to better represent sounds found only in the Nattilingmiut dialect. (PHOTO BY JIM BELL)