“Our whole world is changing” 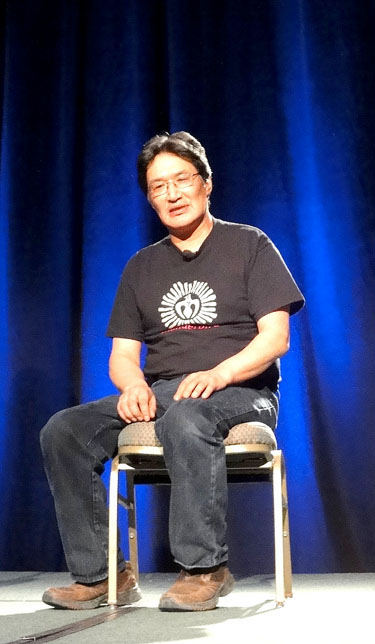 Nunavut filmmaker Zach Kunuk waits for questions after the Dec. 15 showing in Ottawa of Qapirangajuq, billed as “the world’s first Inuktitut-language film on climate change.” (PHOTO BY JANE GEORGE)

OTTAWA — “Our world has changed: land, sun environment,” says an elder in the hour-long film Qapirangajuq, which was shown at the ArcticNet conference in Ottawa where a public screening of the film took place Dec. 15.

“Our whole world is changing,” Mary Simon, president of Inuit Tapiriit Kantami, said repeating the central message of the film, directed by Zach Kunuk of Igloolik Isuma Productions with Ian Mauro, a filmmaker with a PhD in environmental studies.

If there’s a point where elders strongly disagree with scientists, it’s on the number of polar bears — it’s increasing, they say.

And they also attribute a different causes for the poor physical condition of many polar bears— it’s not climate change but interference from biologists who tag and drug bears for surveys in noisy helicopters, they say.

Rancor between some scientists and Inuit about the differences between traditional knowledge and science even surfaced at this three-day conference on Arctic social and natural sciences— the largest annual gathering of its kind in Canada.

During the question period following the screening, Martha Flaherty, an Inuktitut translator in Ottawa, praised the film.

But she also bashed scientists for mistruths, such as suggesting how Inuit women have shrunk from carrying babies on their backs, when, Flaherty stressed, Inuit women are actually getting taller.

And a biologist in the audience had his own questions for Kunuk and Mauro: he wanted to know how their film attributes many changes in the environment to climate change, but not those affecting polar bears and why a population of polar bears which hasn’t been handled by biologists is still in decline.

The film smartly avoids any clash between their traditional knowledge and science by focusing exclusively on Inuit elders.

Elders from Arviat, Igloolik, Resolute Bay and Pangnirtung talk about melting sea ice, the land heating up, seals losing their vigour, and polar bears heading onto the land because the sea ice has shrunk.

But, while most people in southern Canada haven’t changed their lifestyle due to climate changes, in Pangnirtung, they’ve seen essential infrastructure— such as the bridge that connects two sides of the community— wash away.

Their new warmer world also looks different, too. The elders talk about seeing the sun, moon and stars in different positions — a phenomenon related to a polar mirage caused by warm air.

The impacts of climate change have affected Inuit so much that if the human race is to die out, Inuit may be the first to go, Paul Quassa of Igloolik said

Elders turned out in great numbers when Qapirangajuq was shown in Pangnirtung, but didn’t comment much on the film, Kunuk said.

“The film speaks for itself,” he said.

And anyone can view Qapirangajuq for free by visiting the Isuma television site: http://bit.ly/hQ9bdl