“Any kind of man who hunts snow geese is worried.” 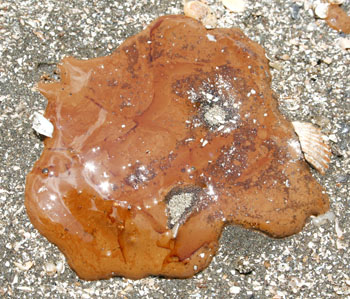 A glob of sticky orange crude oil from the Deepwater Horizon oil spill washes up on a beach in south-central Louisiana, some 200 miles from the spill site. Nearly a quarter of a million snow geese will spend the winter in nearby wetlands. (PHOTO BY JUSTIN NOBEL) 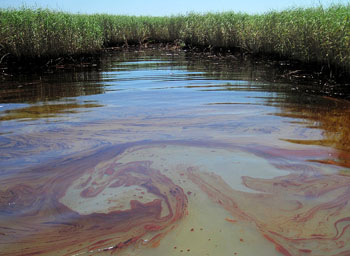 A small cove near the mouth of the Mississippi River is coated with oil. In late August, some 200,000 snow geese will start their migration from the Arctic to wetlands in this area. (PHOTO BY JUSTIN NOBEL)

LOUISIANA — Shrimper Carey O’Neil is heartbroken as he steers his small fishing boat through a slick of oil near the mouth of the Mississippi River, in Louisiana.

“This is one of our best shrimping spots,” O’Neil says. “All these guys are going to be out of business.”

Hunters and fishermen in Nunavut and Nunavik may relate to shrimpers like O’Neil, who face losing their livelihood due to environmental damage.

But Arctic hunters will soon have a much more personal and pressing reason to consider the Deepwater Horizon oil spill far to the south — the Arctic’s snow geese are headed right for it.

Peter Jaaka was not thinking about oil contamination when he took his five year-old son snow goose hunting near Salluit earlier this spring.

But now Jaaka says he is very worried about how the Gulf oil spill might affect snow geese.

“Our snow geese are in Nunavut right now making eggs and after that they will go back southbound and be affected for sure,” says Jaaka. “Everybody is worried for next year’s snow geese season, not just me, any kind of man who hunts snow geese is worried.”

Beginning in late August, about three to six million snow geese will migrate from their breeding grounds in places like Bylot Island near Pond Inlet to the Gulf of Mexico.

Many will settle in agriculture fields along the way, but nearly half a million will head for the coast.

About 200,000 snow geese will winter in marshes right at the mouth of the Mississippi, where oil has hit hard.

Although the interior mudflats where the birds feed are still oil-free, a hurricane could push oil into snow geese habitat, and U.S. government meteorologists have predicted that this year will be an “active to extremely active” hurricane season.

“If we get storms coming in and big tides it could coat the entire marsh with oil, right where these geese spend a lot of their time,” says Paul Link, a waterfowl expert with the Louisiana Department of Wildlife and Fisheries.

Snow geese are not the only Arctic birds that will be affected by the spill.

Other Arctic waterfowl that migrate to the gulf include loons, green wing teal, white fronted geese, dabbling ducks and the American widgeon.

Like the snow geese, their habitat is now relatively oil-free, but a hurricane could change that.

Arctic shore birds are not as lucky. Some species already encountered oil in the gulf this spring, before they left for the Arctic.

Come fall, sand pipers, sanderlings, ruddy turnstones and long and short billed dowitchers will again head for Louisiana beaches like Grand Isle, which has repeatedly been smothered with oil.

Signs along the shore indicate the beach is closed to the public but there is no way to let the birds know that their winter grounds have been poisoned.

Of particular concern to biologists are a group of seabirds called phalaropes. They are nesting right now in the buggy wetlands of the High Arctic islands, but will winter in the open waters of the Gulf of Mexico, where the concentration of oil is greatest.

“Phalaropes are often devastated by any oil contamination at the surface,” says Peter Ewins, the director of species conservation with the World Wildlife Fund Canada.

Sometime in August, relief wells are expected to stop the leaking Deepwater Horizon wellhead, but the tiny organisms that many shorebirds eat, which have been living in oily waters for months, could remain contaminated.

This means that even if the oil spill stops, Arctic birds will still be at risk.

“Many birds feed off crustaceans, young fish and algae, which live right where the oil sits,” says Ewins.

Could the snow geese bring the toxic crude oil with them when they return north again next spring?

Gilles Gauthier, a Laval University biologist who has been studying snow geese in the Arctic for over 20 years, says it is certainly possible.

“I am not a specialist in toxicology,” says Gauthier, “But indeed it is quite possible that the geese ingest some oil and some residue stays in their body, so yes, there is potential for contamination.”

Even without the oil spill, the Arctic ducks and geese that migrate to the gulf face another serious problem: their winter home is disappearing.

Dams and dikes have blocked the silt that replenishes wetlands and oil and gas companies have long sliced up the marsh to clear canals and make room for wellheads.

The rich Louisiana wetlands where ducks and geese thrive are fragmenting and turning into open water. In just the last 90 years, Louisiana has lost some 6,000 square kilometres of wetlands.

Every half-hour, an area of wetlands the size of a football field is gone, says Tom Moorman, the Director of Conservation Planning for Ducks Unlimited, a North American organization focused on wetland and waterfowl conservation.

“It’s a pretty horrible thing to watch,” says Moorman. “Often we think birds can just go somewhere else, but pretty soon birds run out of somewhere else to go.”

It all adds up to grim news for the snow goose and Inuit like Jaaka who rely on them. For comfort, he turns to the same person that Louisiana fisherman like O’Neil do— God.

“We Inuit people pray to have a miracle,” says Jaaka.