Iqaluit ready to ship out 3,000 tonnes of scrap

Crushed metal ready to to after year’s delay 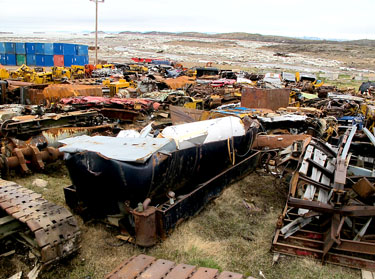 The carcasses of construction equipment, fuel tanks and other industrial scrap metal are piled beside the unloading area on Iqaluit’s beach. City administrator John Hussey said all this material will go south early in the sealift season. (PHOTO BY GABRIEL ZÁRATE)

Thousands of tonnes of scrap metal are now ready for shipment by sealift out of Iqaluit.

After a year’s delay, the stockpiled, crushed metal sitting by the beach’s mustering area is ready for recycling and will leave as soon as the first cargo ships arrive, said city’s chief administrator John Hussey.

“It’s too bad it didn’t happen last year,” he said. “It would have been nice to get that stuff out of the way.”

Last year, a contractor excavated roughly 3,000 tonnes of scrap metal out of the North 40 – mostly industrial waste that had lain there for decades – and stored near Iqaluit’s beach, ready for the last sealift freighter of the summer.

But high winds and gathering ice threatened the ship as it finished offloading its cargo, so the ship retreated out of Frobisher Bay without taking on the scrap, Hussey said.

“They had to get out,” he said. “When the ice drifted in it was either that (leave) or get caught.”

The equipment for crushing and moving the scrap arrived on one of the earlier sealift freighters in 2009, and the Quebec-based contractor spent the summer preparing the metal for loading, which never occurred.

The contractor is now bringing in flat-bed trailers, a magnetic crane and other equipment on the first ship, Hussey said.

There simply isn’t any room to crush any more metal until the stuff on the beach is gone, he explained.

Once that is done, various levels of government and contractors involved with the program decide whether to take any more metal waste out of the North 40.

There’s also 5,000 tonnes of crushed cars at the West 40 that need to be dealt with.

Gathering them all at the West 40 — where the soil was already contaminated after Cold War-era American military use — got them out of the city and into a location where leaking fluids would not do further damage to the polluted ground.

Hussy said he’s already noticed more dead vehicles in yards around the city, so it might be time for another round of vehicle pick-ups soon, if the scrap at the West 40 is removed.