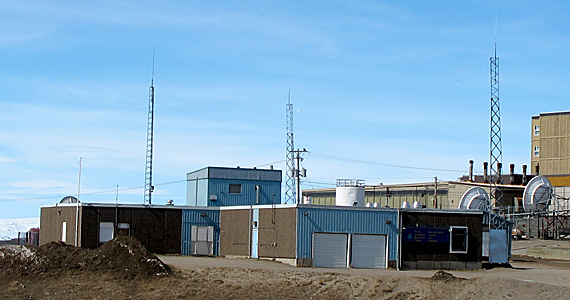 The group that runs the Uquutaq Emergency Shelter for men in Iqaluit is making a pitch to acquire the now-vacant RCMP Iqaluit detachment building on Astro Hill. (PHOTO BY GABRIEL ZÁRATE)

The board that runs the Uquutaq Emergency Shelter in Iqaluit wants to move into the vacant RCMP detachment building on the side of Astro Hill.

The Iqaluit RCMP detachment has moved into a new headquarters building on Federal Road.

In a presentation to Iqaluit city council on May 11, Monte Kehler, the chair of the Uquutaq Society, said the current shelter doesn’t have the capacity to offer programs that could help its residents become more independent.

Located in Iqaluit’s Lower Base, the building is zoned so that it can’t be occupied during the day. Residents must leave the building in the morning and not return until after 5:00 p.m.

Kehler said if the shelter were moved to the former RCMP building there also would be room to set up different types of living spaces, so some people could stay in their own rooms and others, perhaps, in their own apartments.

The Uquutaq group has applied under a special program to acquire the building from the federal government.

No one knows how many such people live in Iqaluit.

The current shelter offers 20 beds in three dormitory rooms, a kitchen, bathrooms and a common area with sofas and televisions.

The shelter’s manager, Doug Cox, explained the problem isn’t capacity. He said the shelter is never too full.

But, because the men can’t stay there during the day, there are no programs to help them develop the life skills they need to eventually leave the shelter for regular housing.

A new facility could offer programs like cooking, money management and job-hunting, he said.

Without them, long-term residents of Uquutaq have a hard time finding a way to leave.

“Seventy-five per cent of the guys that live here actually live here,” Cox said. “We know pretty much who’s coming in every night. It’s pretty much the same guys.”

Uquutaq’s bunk beds are tidy, but obviously lived-in. There are footlockers underneath each one for the men to secure their personal belongings.

The men who stay at Uquutaq range from youths to elders. Cox said he knows three men who belong in the Iqaluit elders home, but tht facility is likely full right now.

Some of the younger men are stuck there because they can’t get housing. Single, able-bodied men get low-priority on waiting lists for public housing compared with families, pregnant women or young mothers.

Cox said there are a few residents who will never be able to live on their own without supervision because of mental or physical problems, but they are a minority.

Some men check in at the beginning of every month, before pay-days, just to stay away from family members with drug or alcohol problems.

Many of the longer-term residents are from outside Iqaluit.

Some are facing criminal charges, housed at Uquutaq instead of the overcrowded Baffin Correctional Centre until they are acquitted or sentenced.

Some residents cannot return to their home communities because they aren’t welcome there because of something they did or are believed to have done.