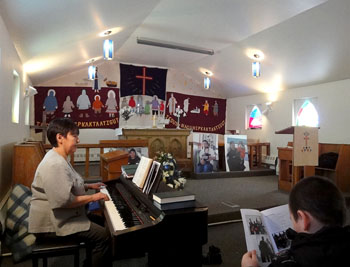 A funeral service for Julian Tologanak-Labrie was held in Cambridge Bay’s tiny Anglican church on April 15, exactly a year to a day after his fatal jump from an airplane en route to Cambridge Bay. Instead of his body, which has not yet been found, large photos of Tologanak-Labrie, his mother, and son were placed near the altar. (PHOTO BY JANE GEORGE) 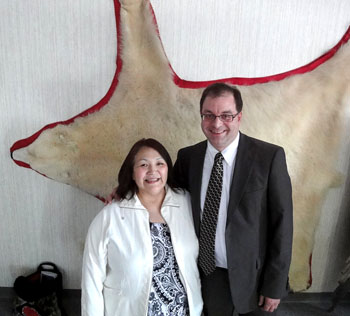 Ready to move on: the results of the coroner’s inquest into the death of her son take Navalik Helen Tologanak and lawyer Steve Cooper from pain to closure. (PHOTO BY JANE GEORGE)

The service— held without his body— took place exactly one year after Julian Tologanak-Labrie, 20, leapt out the door of a medical charter flight headed from Yellowknife to Cambridge Bay.

But an hour later Tologanak wiped away her tears and was able to smile.

The jury who listened to the four-day coroner’s inquest into the circumstances of her son’s death had produced its verdict and five recommendations designed to save others from a similar death.

The jury five recommendations range from installing emergency locks on airplane doors to a review of mental health legislation in the Northwest Territories and Nunavut.

The recommendations are “Julian’s legacy,” which will save countless lives, Tologanak said.

Steve Cooper, the lawyer representing the family of Julian Tologanak-Labrie, in his closing remarks at the inquest, had blasted the governments of the NWT and Nunavut for failing to provide adequate mental health services,

But Cooper, who represented many northern aboriginal clients in the $2.1 billion national residential school settlement, said a civil lawsuit is still “probable.”

“We are past the stage where blame can’t be assigned,” he said.

The financial security of Felix, Julian Tologanak’s three-year-old son, who will have to grow up fatherless, is now at stake, he said.

For her part, Tologanak first hugged Cooper and her grandson, and then vowed to make sure territorial governments and airlines enact the recommendations.

“The recommendations that came out will be carried forward and not just stay on a shelf,” Tologanak said.

The jury called for:

• A review and clarification of mental health acts in the two territories and the regulations governing patient travel;

• Installation of mirrors so pilots in small planes can see what’s happening in the cabin behind them;

• An on-call psychiatrist for emergency care responses; and,

• A panic button that can be activated from the cockpit to trigger emergency door locks.

Garth Eggenberger, the chief coroner of the NWT, who presided over the four-day long inquest in Cambridge Bay said the inquest had done it’s work— and now it would be up to the governments to respond.