Did the first Inuit migrate to Nunavut chasing metal? 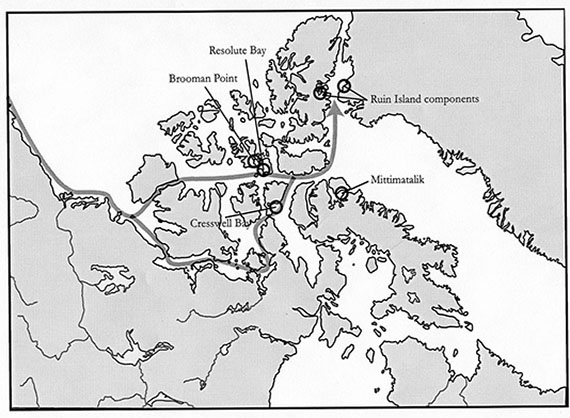 The direct ancestors of today’s eastern Arctic Inuit may have come looking for iron.

A new theory by a Canadian archaeologist argues that the ancestors of modern Canadian Inuit traveled rapidly from Alaska to Greenland, in search of iron for tools and trade.

Ruin Island, between Ellesmere Island and Greenland, may be the earliest Inuit settlement outside Alaska, Robert McGhee, former curator of the Canadian Museum of Civilization’s Arctic archeology department, says in an essay.

“The Ruin Island complex would not appear to be the product of a slow Inuit expansion from the Western Arctic, but of a purposeful expedition across approximately 4,000 kilometres of Arctic geography that had no previous Inuit occupation,” McGhee said in his essasy, “When and why did the Inuit move to the Eastern Arctic?”

Ruin Island lies near Cape York in Greenland, where an iron meteor fell from the sky sometime in the past.

The region was also frequented by Norse hunters, and many Norse-style iron tools were among the artifacts uncovered at Ruin Island.

McGhee asserts that rumours of the iron at Cape York and-or the potential for Norse trade reached the ancestors of today’s Inuit in Alaska through the Dorset people, or Tuniit, who inhabited the eastern Arctic at the time.

Also, McGhee said Ruin Island’s Inuit artifacts have more in common with the societies of the western or northwestern Alaskan coast than with the northern coast.

Citing earlier research. McGhee said the people of that region were involved in trading metal between Asia and North America, so rumours of eastern iron could have acted as a magnet, drawing Inuit explorers and settlers east.

Previous theories hold that the migration of Inuit from the west took decades at least, driven by environmental factors.

But McGhee points to Knud Rasmussen’s expeditions and the documented travels of 19th century Inuit to argue that a group of families could have traveled the distance in only a few years by dog-sled and umiak.

So, according to McGhee, the Inuit mounted what amounts to a mercantile colonial expedition into the eastern Arctic.

“In not comprehending this interpretation earlier, we may have been led astray by the deeply-rooted archaeological tendency to ascribe different sets of motives and different cultural processes to aboriginal peoples than we apply to Europeans or other societies with a written historical record of individual accomplishment,” he wrote.

“Future archaeological work may indicate that ancestral Inuit may be more accurately viewed as an entrepreneurial people from the coasts of the Bering or Chukchi seas, who were attracted to the Eastern Arctic during the 13th century in order to trade with Europeans, and whose way of life has developed as a part of the European world ever since.”

In the essay, McGhee took a new look at older evidence, especially radio-carbon dating that he says is not reliable.

Radio-carbon dating is a method by which a modern laboratory can test an artifact made from a plant or animal.

Such a test gives the approximate date when the plant or animal stopped living, and therefore when the artifact was made by a human being.

The method is one of the lynchpins of archeology.

But in the Arctic, radio-carbon dating is often based on artifacts made from willow trees or driftwood. In both cases, the original tree may have died long before being made into a tool.

So reliance on wood-based radio-carbon samples isn’t a good way of estimating the age of an artifact and where it came from.

McGhee looked at older research and took out the data that came from such unreliable sources, and came up with new, later, dates for the approximate ages of Inuit settlements.

Based on the new dates McGhee estimated, the Inuit settlement on Ruin Island started around AD 1330, rather than the established estimate around of AD 1280.

After removing data from wood radiocarbon dating, McGhee estimated the site there only dates back to about AD 1360.