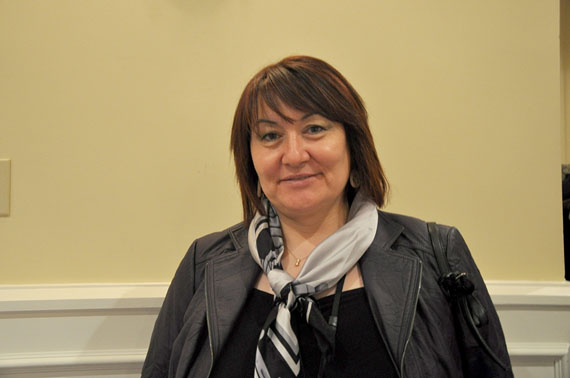 NTI president Cathy Towtongie says the organization must review its policy on uranium mining before it can throw its support behind the proposed Kiggavik project. (PHOTO BY SARAH ROGERS)

OTTAWA – Nunavut Tunngavik Inc. says the territory needs to see “Arctic-specific regulations” around the mining of uranium before they can throw their support behind a proposed uranium mine near Baker Lake.

NTI president Cathy Towtongie said Feb. 23 that the organization will review its own uranium policy at an upcoming meeting before launching territory-wide consultations on the issue.

“We need to take a balanced approach to make sure we do this right,” Towtongie told Nunatsiaq News. “We don’t have the infrastructure at this point.”

The mine’s first port of emergency would be located in Newfoundland, she pointed out.

NTI’s remarks are a departure from their previous backing of Areva Resources Canada Inc.’s Kiggavik proposal, which would build an underground and open-pit mine about 75 kilometres west of Baker Lake.

With other uranium projects in the pipeline for the area, Nunavut’s approach to Kiggavik will set a precedent for how uranium is mined in the future.

“We’ve been interpreted as being pro-uranium mining, but we don’t see it that way,” said NTI vice-president James Eetoolook.

Part of NTI’s policy says the organization will only support the project if the uranium mined in Nunavut is exported for peaceful purposes.

And the project must benefit Inuit, he said, which is why NTI’s policy is under review.

Both Towtongie and Eetoolook made their comments during the Inuit leaders summit Feb. 23, at a meeting of the Inuit Circumpolar Council, who are long-time opponents of uranium mining.

Even Greenland’s Premier Kuupik Kleist – who spoke heavily in favour of oil and gas exploration at the summit — called uranium mining a “hot topic” in a country where the mining of the metal is banned.

Donald Deranger, vice-chief Prince Albert Grand Council in northern Saskatchewan, spoke to the summit about the economic benefits uranium mining has brought to the region.

Deranger believes industry has proven that uranium can be mined safely.

But Jamie Kneen of Mining Watch Canada said that the benefits are obvious; it’s the conditions that aren’t.

“Mining regions end up being sacrifice zones,” Kneen said. “Communities need to access to information first, to understand the outcome of the proposals.”

And, as Towtongie points out, “Saskatchewan in not the Arctic.”

A petition circulated last year by Nunavummiut Makitagunarningit and tabled in the Legislative Assembly called for a public inquiry into uranium mining.

Many fear the radioactive tailings, or waste, from the metal’s extraction could damage human and wildlife populations, even after the mine’s lifespan.